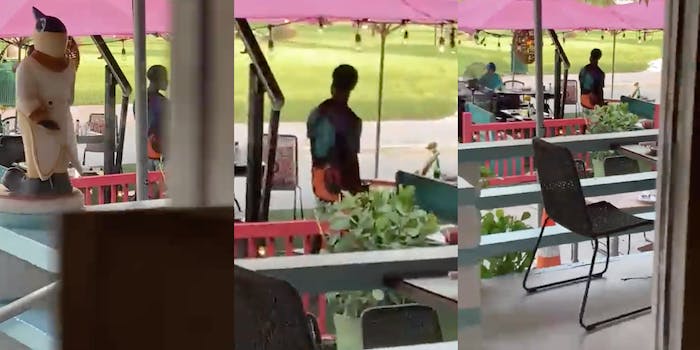 Man allegedly kills father who was dining with his wife and infant son, proceeds to dance over victim’s body in video (updated)

People can be heard screaming in the background as he dances.

Disturbing footage of a Miami Beach shooting is spreading across social media after a gunman was seen dancing over the body of a man he allegedly shot.

The victim, identified as 21-year-old Dustin Wakefield of Colorado, was reportedly dining with his wife and infant son on an outdoor patio when the shooting occurred. A suspect, 22-year-old Tamarius Davis, was reportedly arrested not far from the scene. The suspect was allegedly “high on mushrooms” when he allegedly shot Wakefield.

A nearby park ranger who witnessed the moments leading up to the fatal shooting alleged that Davis was first pursuing another man before shifting targets to Wakefield, according to an arrest affidavit reviewed by the Daily Dot.

A series of videos was filmed by passerby and shared with the Miami Herald. Footage shows, in the lead-up to the shooting, a man, identified by the Miami Herald as Davis, casually walking down the road behind another person. Davis can be seen raising a black gun with one hand before firing it once. The person walking in front of him immediately flees, but Davis does not give chase. The other person was not harmed, according to the affidavit, which was sent to the Daily Dot by the Miami Police Department.

Not long after, he makes his way to the restaurant, where Wakefield and his family were having an outdoor meal. Speaking with police, Davis allegedly said he “randomly chose” his victims. A report from Wakefield’s uncle alleges that Davis entered the patio area waving his gun and proclaiming that “it’s time to die,” before aiming the weapon at Wakefield’s 1-year-old son. Witnesses say, per People, that Wakefield rose, telling Davis “that’s my son” and “he’s just a boy,” which prompted Davis to turn the gun on him. Witnesses claim Davis was “smiling and laughing the whole time that he was shooting,” according to local station WSVN.

Additional cellphone footage shows, briefly, Davis appearing to dance above Wakefield’s body. People can be heard screaming in the background of the footage, as Davis sways. More footage, captured by a nearby witness, shows police locating and arresting Davis in an alley nearby the restaurant.

Davis was jailed on Aug. 25. A police report briefly incorrectly identified his last name as “David.” Davis reportedly appeared in court on the afternoon of Aug. 25 and is being jailed as he awaits trail. He has been charged with second-degree murder with a weapon along with attempted murder, according to the arrest affidavit.

A GoFundMe page has been set up to help Wakefield’s family. The mid-day shooting reportedly shook witnesses and members of the community, who said Wakefield died attempting to protect his family.

“He’s a proud dad,” Marquita Bradford, a witness, told WPLG. “When that baby grows up he’s going to love his dad.”