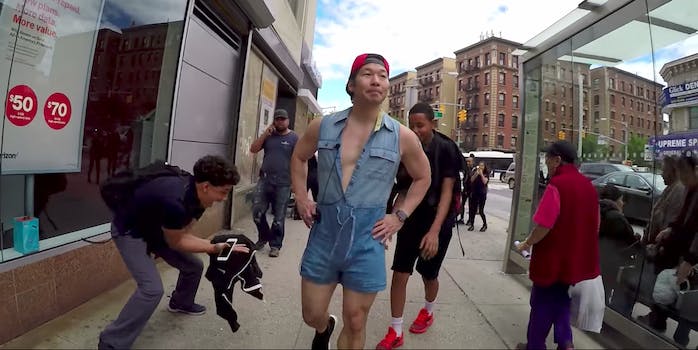 Men, facing shame for your male romper is no more.

So you’ve invested in that Kickstarter campaign and are waiting for your own male romper to arrive at your doorstep, but you’re worried about how people will take your new digs out in public? Quell your socially-constructed fears with this Very Scientific experiment published to YouTube by QPark, showing that, yes, people love rompers on men.

In his latest video, YouTuber Park walks through three different Manhattan neighborhoods in New York City—Washington Heights, Harlem, and Times Square—dressed in sneakers, a cap, and his denim romper. While it’s definitely a more-feminine lady’s cut and doesn’t have the sleeves and fly zipper of the viral and much-criticized (albeit adored) RompHim, Park rocks the sleeveless look with an unbuttoned top half and waist untied.

Yes, Park is thoroughly burned by cruel school children in Washington Heights who all but yell, “WHAT ARE THOOOOOSE?!” at Park’s outfit. Meanwhile, several barbers tell him he’s not a “real man” for brandishing the romper, and they advise him to go to the Village to get his hair cut, insinuating that he’s gay and “less than” for wearing clothing purposed by women (and, lest we forget, actual toddlers).

But as Park goes further south into Manhattan, reactions go from mocking to excitement and praise for seemingly being the “first” man to test drive a romper in public. In Harlem, women take pictures of Park, while one man tells him, “No offense, but you look hot,” and another asks where he got it. Then in Times Square, a few cops tell him about their own male romper collections (makes sense, for all those hot summer days patrolling on bike). Then, a group of guys stop Park for a picture—which could have been in jest but no one told him that he looked ridiculous. Progress!

Yes, the positive reactions were definitely helped by how Park looks like a full-fledged romper model part of some viral marketing campaign, but several of his critics were fairly positive at seeing a man wear a shorts-and-top one piece.

So, there you go, straight, good-looking men. Congrats on beating the final frontier and finally being able to wear traditionally-women’s clothing without shame. Persecuted, no longer. (/sarcasm)