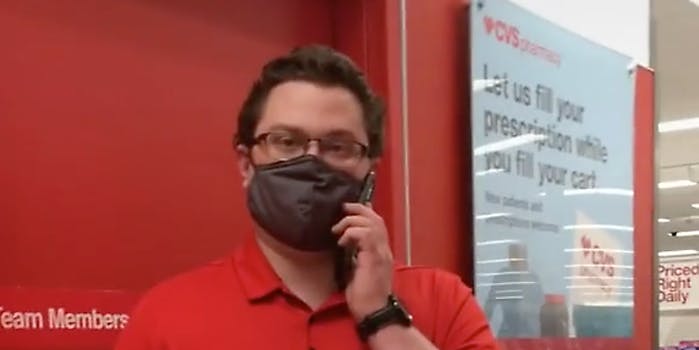 ‘The BS I had to deal with after a long day’: TikTok pharmacist says fellow Target employee called 911 on him

The employee didn't believe the pharmacist was just doing his job.

In a viral TikTok video posted on Wednesday, a Target employee dubbed a “Karen” allegedly calls 911 on a store pharmacist who’s locking up for the day. The employee apparently doesn’t believe that he’s really a pharmacist.

The video starts with the Target employee asking the pharmacist if he works there as he is trying to leave for the day.

“I’m locking the door. Are you serious?” the pharmacist says while filming.

On the video, the pharmacist wrote, “The BS I had to deal with after a long day at the pharmacy. He’s on the phone trying to call 911.”

In a second video, the incident continues. The pharmacist again says that he is not committing a crime and that he didn’t do anything wrong.

“You don’t see me committing a crime, do you,” the pharmacist says to the employee.

“While on the phone with 911, he called for backup on his radio,” the TikToker’s caption said. “Store security guys ran over to the ‘crime scene’ moments later.”

The TikToker wrote that as soon as the security guards showed up, they immediately told the Target employee that the man filming was the pharmacist.

People in the comments criticized the Target employee for confronting the pharmacist.

“Prove to me that you work here as if you needed freedom papers,” @dontsipthesauce added.

According to the TikToker, the Target employee walked away from the incident without an apology.

Target did not immediately respond to the Daily Dot’s request for comment.