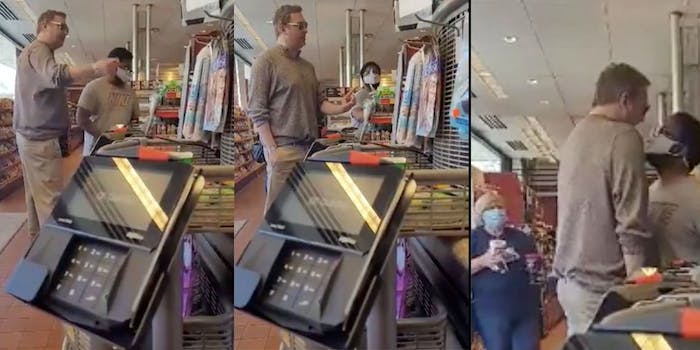 "In all my years, never have I ever encountered a more pretentious jerk."

A Male Karen ruined everyone’s day at a QuikTrip convenience store because he was upset about gas pumps. His tirade was captured on video and later shared to a QuikTrip subreddit.

The footage comes from Redditor TDGCMtz, who appears to be a QuikTrip employee judging from the videos posted on their page. In the comments, the poster claims that the video was taken at an Omaha location.

The r/QuikTrip subreddit post is titled, “In all my years never have I ever encountered a more pretentious jerk…There was a lot that had before this.” Over the course of a minute and 47 seconds, it’s evident how the video earned the title.

It begins with the Male Karen, maskless and wearing sunglasses, complaining about an issue with the gas pump. (The poster claimed in the comments that it wouldn’t take his card.)

He then tells the person behind the counter, “And say you’re sorry.”

The clerk responds, illustrating in colorful language that an apology is not coming his way, and that he should instead apologize.

That does not sit well with the Male Karen. Then, a Black customer comes to the defense of the cashier, saying, “Say sorry to me.”

“Why?” the Male Karen responds. “Because you’re dumb.”

It gets even less dignified from there. The customer tells him, “Get the fuck out of here, I ain’t leaving for nothin’,” and then addresses what appears to now be two people behind the counter—who are not visible from the video’s vantage point—saying, “Say you’re sorry for treating customers like shit.”

“This is over with,” the second person says behind the counter, but alas, it is not.

“I did nothing wrong,” the Male Karen asserts.

He then continues (with index finger waving to and fro), “Your gas pump didn’t work, I walked inside, you treated me like crap, you didn’t apologize for your gasoline being dump, you bragged about making 80 grand when you don’t, so you’re a liar and your brand image is wrong.”

That raises the ire of the Black customer, who confronted him earlier and was standing right next to him as he made the racist comments. Within seconds, they are verbally sparring, while an old man wanders into the frame doing his best to ignore the fracas.

The fight continues on in the background, with the Male Karen alternating between tough talk (“Go all day”) and the odd non-sequitur (“You don’t think I played pro basketball?”).

After one more “Enjoy your Keystone,” he leaves with one more parting shot to his adversary: “I’m gonna pay your check next week.”

Certainly, everyone within earshot at that QuikTrip will remember that encounter long after they’d like to forget.

The behavior was so boorish, it led one Redditor on the thread to reflect, “Glad I work during the night.”

That led another to respond, “Overnights are just a different struggle.”