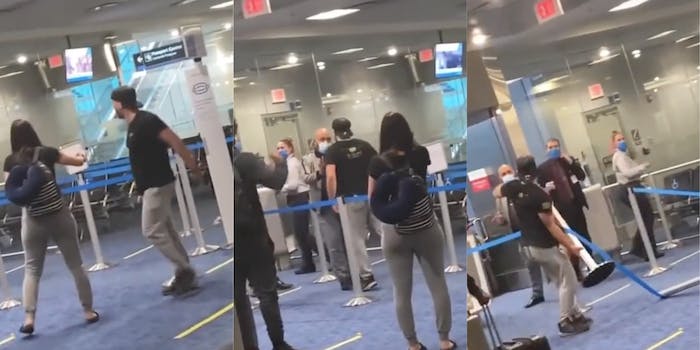 He was denied boarding due to his 'aggressive behavior.'

Aggregator @RonFilipkowski posted the video, which details a full minute of a belligerent and wildly combative male Karen, who Local 10 identified as a military veteran. Several people on their cell phones captured the incident.

Per the report, “the man was then denied boarding on the flight due to his aggressive and possibly intoxicated behavior.”

The video shows the male Karen yelling expletives at airport employees, who all attempt to keep calm. The pacing Karen, though, got racist, saying, “pussy ass [N-word]” to an employee.

The man picks up a pole shortly after and throws it at the crew. He then kicks over a wet floor sign, and charges back over, and manages to throw an errant punch that lands him on the ground.

Per Local 10: “Police later said that man was a military veteran who was going into some form of crisis. After being taken into custody, Miami-Dade police brought the man to a treatment center for evaluation.”

Onlookers believed the Male Karen was inebriated, and he had already “entered the women’s restroom near gate D23 and got into a physical altercation with his girlfriend.”

Interestingly, per the report, “while the incident took place in Terminal D, authorities said they took the man into custody near the baggage claim.”

Many of the comments related to the idea that this Male Karen was able to carry on for such a long period of time. Another person tweeted: “Now imagine if he wasn’t white. There would be a lot less “please calm down sir” and a lot more ‘a man was shot today by airport police after violently attacking airport staff.'”

The Daily Dot reached out to Miami International Airport authorities and airport police for comment.