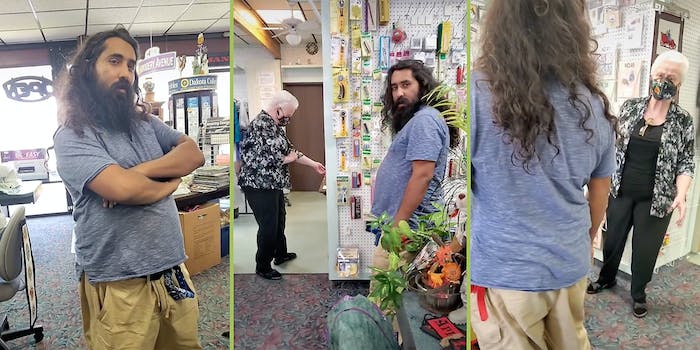 The anti-masker lets it slip that he is visiting all the stores that have mask policies in place.

A set of viral TikTok videos show a male Karen harassing elderly store owners in California over their mask policy at a sewing and arts and crafts store.

Over the numerous videos that end with police interaction, the male Karen compares him being refused service over his anti-mask position with anti-Black discrimination. The man also equates racial discrimination to the execution of the ADA disability act.

TikToker @bravom219 filmed and posted the videos of the man verbally abusing an elderly duo who refuse to sell anything to him. The caption on the initial video reads: “Part 1: 10 [minutes] turned into an hour. FOUND this man harassing the store owners because he was told to wear a mask or leave. #FYP#againstmasks.”

In the first video, he puts a sewing tool in his pockets, which the videographer takes out of his pocket at the first opportunity.

“What happened when people were Black and being discriminated against?” the man asks, as he describes a situation with Black shoppers during Jim Crow, which isn’t remotely comparable to his case.

In the second video, he says this is the closest sewing shop to his house and calls their refusal to let him shop there “ridiculous.” “Is that the way treat people; is that the way to mask problems?” he asks.

Then he harasses the videographer about being recorded.

In part three, the man admits on camera that he’s going to locations that aren’t allowing customers to shop without masks. After the videographer calls him out, the man unsuccessfully attempts to walk back his statement. “That’s why I have to go after the few places with the types of policies that are affecting everybody’s rights,” he says.

“Would you go away and just shut up,” says the older woman in part four.

In part five, the police arrive at the scene, and the man is seemingly attempting to explain his case to them, but the police seem uninterested. One commenter notes, “He really thought he would get his way.”

The man was seemingly not arrested by the police. Responding to a woman that said, “they’re talking way too long,” the videographer responds, “Yup! But they wanted him to come out. But of course, he’s smart. He stayed inside to avoid an arrest. They were close to [arresting] him, but he [complied].”

The Daily Dot has reached out to @bravom219 for additional comment and information.