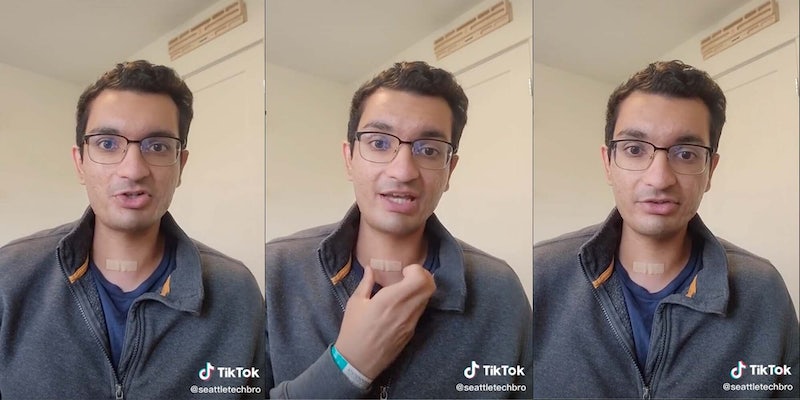 'Man the internet can be such a good place sometimes.'

The popular finance TikToker, who boast over 17,000 followers, goes on to explain that he received direct messages and comments about the size of his thyroid when he first started posting videos in May 2021. As it turns out, the nodule in his thyroid that commenters noticed was cancerous.

He says he has since had it removed and is now in recovery but that it’s still difficult and “draining” to speak. The thyroid is a gland is located at the bottom of one’s throat.

@seattletechbro’s story is reminiscent of others who have been clued in about their swollen thyroid by viewers. Flip or Flop’s Tarek El Moussa received an email from a nurse who watched his show and said he had a large nodule. He was ultimately diagnosed with diagnosed with thyroid cancer.

And a guest on Beachfront Bargain Hunt had a “large thyroid mass,” according to a surgeon who was watching the show. The guest also had thyroid cancer and reportedly received adequate treatment.

“I was nervous about reaching out, but I’m really glad I did,” wrote @ramram1234562 on @seattletechbro’s video. He responded to her comment thanking her for doing so.

“Man the internet can be such a good place sometimes,” wrote @melissabccc.

The Daily Dot has reached out to @seattletechbro.