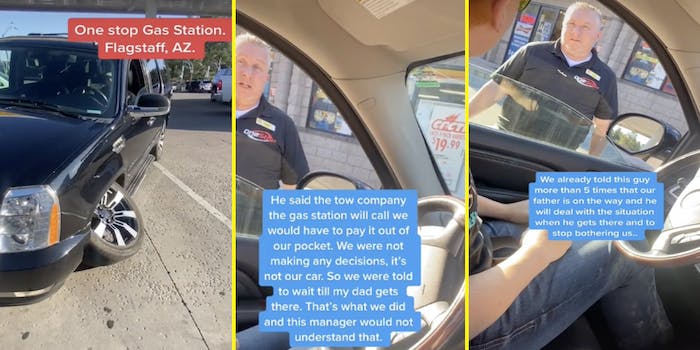 ‘I can really mess this up’: Driver’s front axle breaks at gas station, Male Karen threatens him for not moving car

The Karen threatened to call the police on the driver, despite the driver telling him that help was on the way.

A TikToker posted a video of her brother having an argument with a gas station manager, who she described as “definitely a Karen in male form,” trying to get them to move their car stuck in the gas station parking lot — even though the car clearly needed to be towed away as a tire had, in her words, “fallen off.”

The video comes from TikToker @taeirish, who documented the argument on the platform, with 1.5 million views on the third video in the three-part series.

It began with the TikToker narrating the situation: She was in the car with her brother, and they were backing out of a parking spot in a Flagstaff, Arizona gas station when part of the front axle broke, leaving the car unable to move.

Then, the video breaks right into the middle of the action—she notes that several conversations had taken place between the male Karen manager, who wanted the unmovable car moved, and her brother, who was trying to call their father and police to come assist.

“You take care of your shit,” the brother advised. “I’m trying to take care of my shit. Let’s just wait on the police and stop talking to me.”

But as at least one commenter pointed out, the manager seemed like he was trying to provoke the situation, meeting the brother’s request with threats like, “I will call the emergency number and say you’re being combative” and “I can really mess this up.”

They do come to some sort of understanding, however, that the manager, despite making threats about calling the police, doesn’t want to take the siblings to jail for helplessly sitting in a car with a busted wheel and expressing frustration.

There’s also a part two video that reveals a little more about the male Karen’s concerns, which includes expressing he doesn’t want them to do the repairs in the parking lot. (The brother indicates he’s in agreement with that.)

“I never said ‘Fuck you’ one time,” the brother asserted—which led the manager to make an argument that seemed to boil down to “you can say it without actually saying it with your attitude.”

Then, there’s a part three in which the dad finally arrives, calls the manager an “ass,” and then the family proceeds to try to move the car into a parking spot, using the car’s jack for leverage, while the manager calls the police.

As the TikToker reported, when the police finally arrived, they assessed that not much could really be done until a tow truck arrived.

Though the captions in the video really helped to bring out the whole narrative arc in the saga, the creator went into the comments section to flesh out even more telling details.

“At this point,” said one observer in the part three video, “I would just put the window up. I swear this man is just trying to cause issues.”

“Definitely a worker came up to us,” the creator answered, “and said he has his days and not to worry about it.”