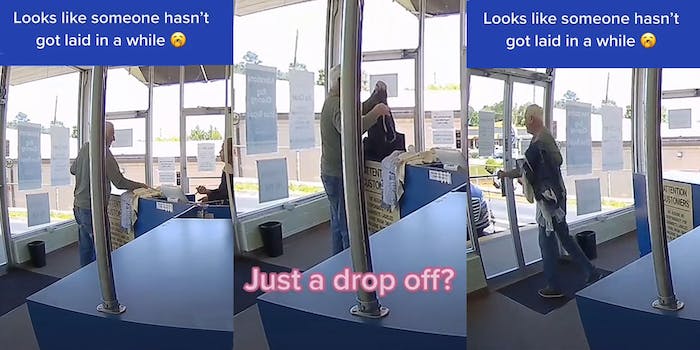 ‘That was the most childish thing I’ve seen in a long time’: Man gets upset, storms out of cleaners after worker asks simple question

'That was a normal question…why did he get so mad?'

A TikToker sparked controversy this week after revealing footage of an older white man, dubbed a male “Karen,” storming off after she asked him a seemingly normal question while working as a cashier at a dry-cleaning store.

The video, which was posted by TikToker Allison (@psychomush) and has over 1.1 million views, shows a recording of a man bringing in some clothes to a dry cleaning store. The TikToker, who is working the front desk, asks the man if he is just dropping off his clothes.

“What else would I be doing with it?” the man says, before immediately storming out.

“No like, do you have something to pick up?” Allison says as the man walks out the door. “The fuck was that?”

“Hey, don’t come back!” she says as she walks outside to speak with him.

“Looks like someone hasn’t got laid in a while,” Allison captioned the video. “I swear I love Karen’s.”

In an interview with the Daily Dot, Allison alleged the man in the video has a history of being aggressive, storming out of the store, and yelling at her and her co-workers multiple times. She said that on a previous occasion, she calmed him down and resolved the situation. However, she said the occasion recorded in the TikTok was the final straw.

“He started yelling at me, as if I was a kid or something. I instantly felt like, you are not going to treat me like I am a child,” Allison said. “He’s not having a bad day. He’s naturally like this.”

Many users in the comments section of the viral TikTok criticized the man for his rude behavior.

“Same type of man who says my generation is too sensitive,” one user commented.

“That was the most childish thing I’ve seen in a long time,” another responded.

Others were confused, saying the worker was just doing her job.

“That was a normal question…why did he get so mad?” someone asked.

However, on the flip side, some users criticized the worker for her reaction.

“I wouldn’t have even gone outside to ask why he’s mad, just let him go,” one user replied.

“You should have stayed inside whether this was his 2nd time or not. Stay professional,” another responded.

Allison told the Daily Dot receiving an onslaught of critical comments has been stressful.

“Honestly being on the receiving end of these comments makes me kind of anxious,” Allison said. “Out of nowhere one night, I started getting a lot of hate saying I was the one being unprofessional…They started getting to me. Honestly, I was debating taking down the video because I started thinking maybe I was in the wrong.”

However, Allison said she remembered she has never cursed at or yelled at a customer, only yelling at the man as he left because he was far away. Furthermore, she said she reflected on how the man has been disrespectful toward her multiple times.

Many users supported and defended the TikToker’s reaction.

“Good for you stand up for yourself. Sometimes people need to be checked and know they aren’t welcomed. Customers aren’t always right,” another responded.