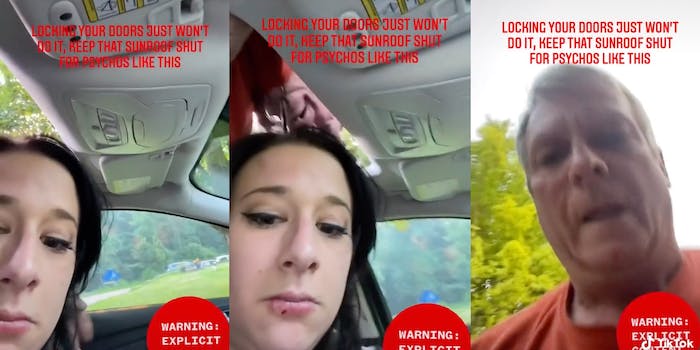 Video: Male Karen climbs into woman’s car through her sunroof in a fit of road rage (updated)

The incident occurred after he allegedly brake checked her.

A TikToker managed to record a few seconds of a shocking road rage incident and is using it to warn others to take extra safety precautions.

Danielle Levesque stopped her car after she says another man on the road brake checked her, causing her service dog to fly into her dashboard. What happened between them immediately afterwards is unclear, but Levesque told viewers she made the mistake of getting out of her car, and when she got back in to grab her phone and record the man’s erratic behavior, he stepped it up a notch.

The few seconds of footage she captured show her turning on her camera just before a man climbs in through her car’s sunroof and snatches the phone out of her hand as she screams. The video ends on a close-up of his face on top of the car.

“He chased me into my car and I proceeded to lock the doors and try to get my phone out,” Levesque explained in a follow-up video. “And I was trying to turn my camera around to face the window, ‘cause it was facing me, and he proceeded to crawl into my sunroof as I was trying to do that.”

The saga didn’t quite end there, as she later added that after she got her phone back and drove away, he actually tried to follow her home.

“I lost him and got home and called the police,” she said.

The video, which has been viewed over five million times on TikTok, was so surprising that some viewers initially thought it must have been staged, or was some sort of prank.

“Girl please tell us this was a sponsored PSA featuring your Dad,” reads the top comment.

Other commenters wondered why she was recording rather than driving away or fighting back, although she responded to one viewer to clarify that it all happened faster than she could think things through, and said he was blocking her car.

The back and forth in the comments led to Levesque’s additional videos explaining what happened, as well as frustration between viewers regarding victim blaming.

“When there’s ‘no proof’ of smth happening yall refuse to believe victims but when there IS proof it’s why were u recording? why didn’t u fight back?” @suultang wrote in the comments. “Like seriously we can’t win with yall why didnt this man simply not jump into her car.”

While not all the details of the encounter have been shared, it is hard to imagine any scenario in which jumping onto someone’s car and snatching their phone through the sunroof is anything other than unhinged behavior.

Unfortunately, the takeaway Levesque has been left with after the harrowing encounter is that the safest bet for now is to always keep her sunroof tightly closed.

“Locking your doors just won’t do it, keep that sunroof shut for psychos like this,” she wrote.

This story has been updated to include Levesque’s response.