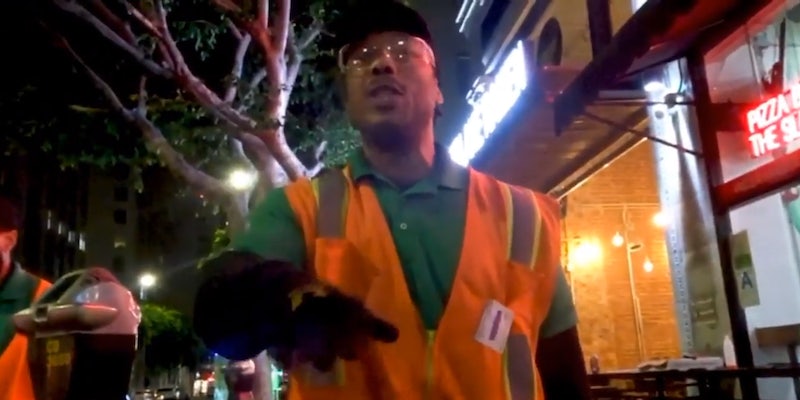 Karen alleged that a wet car would hurt his business.

A male “Karen” was filmed throwing a tantrum and trying to report a city worker to police for *checks notes* getting water on his car.

In the video, which went viral Sunday on the r/PublicFreakout subreddit, the male “Karen” confronts the city worker about spraying his car with a hose used to clean the sidewalk.

“You couldn’t wait for me to move? You gotta get my car all wet?” Karen asks. “I’m like pulling away and you wet my car, even on the windshield.”

The Los Angeles city worker, who is clearly busy and unaware that his actions caused offense, asks Karen if he wants him to spray his car, to which Karen replies, “You already did.”

“OK, but what you want me to do?” the city worker responds, visibly irked by the hold-up.

“Have some courtesy,” Karen says, to which the city worker responds, “I have a job to do here.”

“I literally just left the car wash,” Karen tells the city worker. “I have a job to do, too. I’m an Uber driver. I don’t make that much money either.”

Once more, the city worker asks Karen what he wants him to do.

“I just told you,” Karen says—which is technically true, although “having some courtesy” likely will not result in an un-sprayed car.

This fruitless back-and-forth continues for a while until the male Karen asks for the name of the city worker’s employer.

The city worker flashes a Chrysalis Enterprises hat and says, “Call the company, I don’t care,” then instructs his co-worker to take a picture of Karen’s license plate. (At this point, Karen has been improperly parked and holding up the Chrysalis employees’ workflow for about two minutes.)

The city worker then flags a police car across the street and tells Karen to bring his issue to them if he’s so upset. Of course, Karen takes the bait.

“I just ate some tacos. I’m going to pull out, and this guy sprays my car down,” Karen tells the officer.

The video cuts off before the cop reacts, but the truncated clip provided redditors with plenty of ammunition to roast Karen. One user imagined a best-case scenario in which, after hearing Karen’s complaint, the cop ticketed him for parking improperly.

“I am so happy that in about 6 billion years the sun will explode and end all of this,” another user commented, speaking on behalf of most of the human race in 2020. “Why do people suck so much?”

It is unclear at press time whether going viral for harassing a city worker helps or hinders business for Uber drivers.