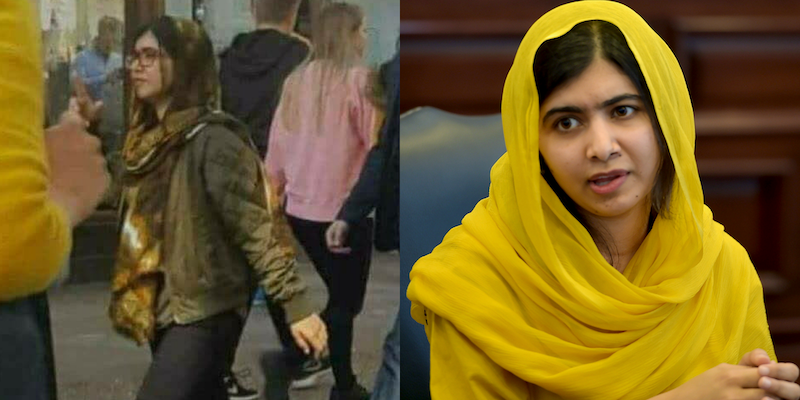 People are trolling Malala Yousafzai for wearing skinny jeans—but is this photo even her?

Why should it matter what she's wearing anyway?

Malala Yousafzai—or her doppelgänger—just can’t catch a break. Not even a week into her first semester at Oxford University, the activist and student is already being mocked and chastised online for her clothing—or the skinny jeans of someone else.

Last week, a photo began circulating online purportedly showing Yousafzai walking across the Oxford campus while wearing skinny jeans, boots, and a green bomber jacket, along with her dupatta, a head covering. According to the Independent, the photo was widely shared and criticized on Facebook for Yousafzai’s apparent Westernized wear before being printed in Pakistani and Indian publications.

Our #MalalaYousafzai of #Swat looks great in jeans. Can’t understand why her choice of clothes is a problem for some. Pak haters get a life! pic.twitter.com/dojzev0AUW

More people lost their minds over Malala wearing jeans than when she got shot. Our priorities demonstrate why we are our own worst enemy.

While the photo hasn’t been verified to be Yousafzai, a Google Maps search shows it was taken on the Oxford campus, near the intersection of Cornmarket and Ship streets. The woman does appear to partially resemble Yousafzai’s side profile, as well as the left part Yousafzai has in her hair.

Regardless of the identity of the woman in the criticized photo, however, it shouldn’t matter how Yousafzai chooses to dress to attend school, or elsewhere—these personal effects don’t alter her learning nor her advocacy for girls’ education, and have no bearing on her general capabilities.

Meanwhile, here’s are a few photos that are indisputably Yousafzai—her taking part in her matriculation ceremony at Oxford, officially inducting herself as a student at the university.

Hopefully, this visual evidence of her excellence can drown out the trolls over her next few semesters.