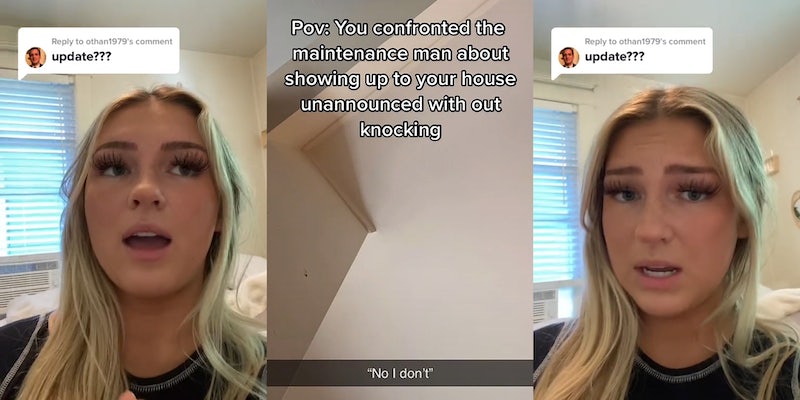 ‘You need to knock before you come in’: Woman confronts maintenance man about showing up unannounced

'He is clearly aggressive and has boundary issues. Don't sleep there until it's addressed.'

When renting an apartment, most renters have some expectation of privacy loss.

A renter might hear their neighbors watching television, have curious eyes peering through their street-level windows, or require a handyman to come into their living space on short notice to make repairs.

Still, with privacy loss comes a concurrent expectation of tact. For example, entries into an apartment are usually, but not always, preceded by a warning to the tenant that someone will be stopping by.

However, after a maintenance person entered her apartment twice unannounced, Milwaukee, Wisconsin-based TikToker @idontwannabefound72 decided that enough was enough. In a video with over 1.3 million views, she confronts the maintenance man, telling him that he needs to knock before entry.

“You need to knock before you come in,” she tells the maintenance man.

“Yeah, but you need to knock, at least,” she insists.

In a follow-up video, @idontwannabefound72 aimed to provide more context about the situation.

In summary, she says that the washing machine was broken in their apartment. She says she contacted her landlord, with whom she has a positive relationship, via email to resolve the issue.

The landlord then allegedly forwarded her email to their handyman, who did not respond. A few days later, she says he entered their apartment without knocking and appeared to have worked on the washing machine.

Upon trying to wash her clothes the next day, @idontwannabefound72 says she discovered the washing machine was still broken. She says she contacted her landlord to sort out the issue, and he was apparently unaware that the maintenance man had even stopped over to begin with.

The next day, @idontwannabefound72 says she was alone in her apartment and lying in bed when she heard someone enter her apartment. Knowing that it was most likely the maintenance man again, she says she began recording, leading to the events visible in the video.

@idontwannabefound72 says her landlord has been understanding and “embarrassed” about the situation and promised to change the locks, which she says “will be happening eventually, not soon enough in our opinion.”

According to Wisconsin’s Tenant Resource Center, “Wisconsin landlords cannot enter an apartment unless they give at least 12 hours notice to the tenant.” As “tenants in Wisconsin have the right to exclusive possession of their apartment,” this generally extends to maintenance workers as well.

Furthermore, “before entering, the landlord must announce their presence to persons in the unit and identify themselves upon request,” which the handyman did not do.

The only times a landlord or maintenance worker are allowed to enter an apartment without notice in Wisconsin are “if there is a ‘health or safety emergency,’” “to protect the premises from damage when the tenant is absent,” or “if the tenant, knowing the proposed time of entry, requests or consents to the entry.” In this case, @idontwannabefound72 didn’t know the time nor did she consent to the entry.

In a later video, @idontwannabefound72 says she is getting an interior door lock installed.

She also revealed the emails she sent her landlord and his response.

In this email, the landlord appears to be taking the concerns seriously and is making plans to rekey the door.

In comments, users encouraged @idontwannabefound72 to take every step necessary to feel and be safe.

“Did he just say ‘NO I DON’T’? He is clearly aggressive and has boundary issues,” a user wrote under the original video. “Don’t sleep there until it’s addressed. That’s terrifying!”

“You need cameras girl,” added another. “I wonder how often he comes in without you knowing.”

“I would file a police report,” a third advised. “Nothing may come of it but you will at least have an official paper trail in case something else happens.”

“Hire a company to change your locks and give landlord the bill,” suggested a fourth. “Do not give landlord copy if key until that maintenance man is fired.”