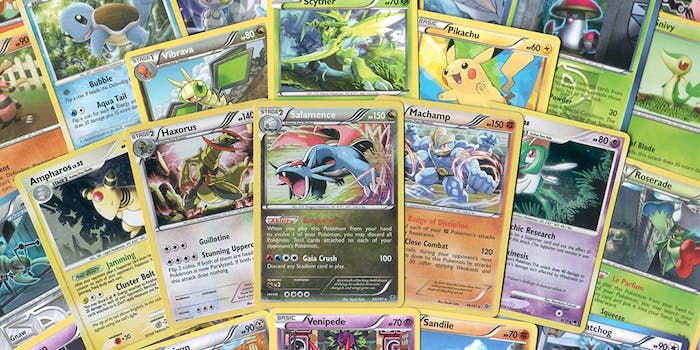 The beginners guide to mastering the Pokémon Card Game

Gotta collect them all!

So you want to be a master of Pokémon? Do you have the skills to be number one? With this Pokémon card game guide, you soon will!

Pokémon card bouts are almost as ancient as the video game they’re based on. Battling monsters using cards is almost as fun as battling using Link Cables. And while the mechanics are similar to the games and even the anime, there are a few deviations that streamline this incredibly lo-fi version of the time-honored Pokémon battle.

Jumping into the game is easy, whether you’re new to Pokémon or have great childhood memories of killing Missingno for infinite rare candies. Here are a bunch of great starter decks that will get you started on your road to becoming a Pokémon Card champion.

These decks will allow you to start playing right away. They all come with damage counters, a playing mat, and a special coin with the Pokémon featured on the box.

Alolan Exeggutor looks goofy AF, but on the battlefield, it’s an absolute tank. This is among the newer decks, featuring Alolan versions of Marowak, Sandslash, and Raticate.

Sometimes the best defense is a good offense. This deck only contains one type, which is dangerous, but also potentially lethal for your rivals because it means you can get stronger ‘mons out quicker. At the head of your aquatic army is Empleon, and once he’s out, victory is almost assured.

Dragons were fearsome in Pokémon Red/Blue, and would you believe it – they’re still fearsome now. Chief among the deadly dragons is Garchomp, and this deck is built around the earth-shaking beast. This deck is also rounded out with other powerful fighters including Lucario, Gumshoos, and Hippowdon.

Fire and ice don’t normally go together, but in this deck, they work in perfect harmony. Alolan Vulpix is graceful in battle, and she’s backed up by powerful fire types Heatmor and Pansear. There’s also a Kingdra to help throw it back to the Gen II glory days.

You can’t fight the elements in Pokémon…that is, unless you’re a dragon type. Kommo-o heads this deck, with some serious backup from powerful electric types like the kawaii and powerful Alolan Raichu. Prepare to destroy your enemies…with cuteness.

You can’t play Pokémon alone. Well, not the card game anyway. And considering the game is easy to pick up, you should always have a spare deck handy in case you and your friends want to spar. These packs contain at least two decks built to compete against one another, making every battle as tense as possible.

Are there any two Pokémon more iconic than Pikachu and Mewtwo? Probably not. Mewtwo’s deck is packed with powerhouses like Nidoking, Machoke, and Dugtrio to stampede over the competition. Pikachu’s got a force of nature behind him including Beedrill, Magneton, and Electabuzz. Whatever deck you choose, nostalgia will fill the battlefield.

Nothing makes a deck quite as frightening as a legendary. Each of these decks is headed by two beasts, one from the earth, the other from the skies. Zygarde’s army includes Hawlucha, Serperior, and Lucario. Lugia’s armada covers the gamut as well, with normal, fire, and fairy types including Whimsicott, Snorlax, and Delphox.

The stars behind these decks are deceptively cute. And while they ooze adorable, they’re equally powerful. Brilliant Thunder stars Heliolisk, the electric reptile. Luxio, Fletchinder, and Lopbunny provide some serious backup. Mystic Typhoon is headed by psychic kitty Meowstic. The equally graceful Milotic, Furfrou, and Dusclops round out the chic team.

The Pokémon Sun and Moon legendaries share an evolutionary line, but besides that, they’re night and day (pun intended). Lunala’s Hidden Moon deck rules the dark with the power of psychic and fire types including Salazzle, Lampent, and Bewear. Solgaleo’s army of light is a stoic defense force of steel and psychic types like Metang, Slowbro, and Delmise.

Lycanroc shakes the earth with how powerful he is. Alolan Ninetales is just as fiery as her Kanto form, despite being an ice type. Plus, each is packed with new and classic powerhouses including Ryperior, Kingdra, Meowstic, and Alolan Sandslash.

You’re going to need a place to store your new decks. What better case than a gorgeous tin featuring one of your favorite Pokemon? Each tin comes with four booster packs inside, letting you pump up the power of your decks.

After getting your feet wet, it’s time to dive deep into the game and become elite. Each of these boxes comes with eight booster packs, 45 assorted energy cards, and 65 card sleeves featuring the Pokémon on the cover. It also comes with a collector’s box to hold everything, with four dividers to keep everything organized, a six-sided damage counter die, and a competition legal coin.