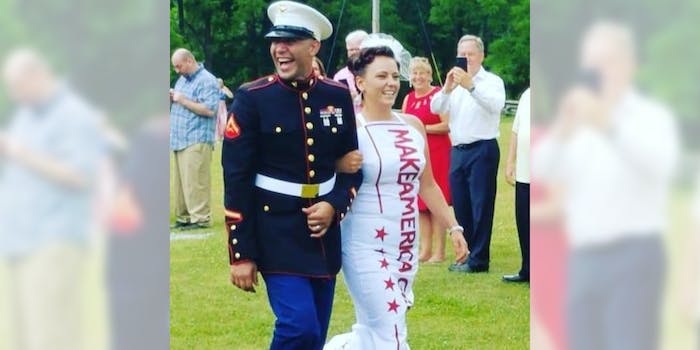 The bride wore a dress with 'TRUMP' written across the bottom flare of her gown.

The personal is political, and for one Michigan couple, the political was key even on their wedding day.

A couple from Kalamazoo, Michigan, recently celebrated their holy matrimony and centered the theme of the wedding on their admiration for President Donald Trump and his “Make America Great Again” rhetoric. Their wedding hashtag was #MAGAPatriotWedding.

Audra and Jeff Johnson shared photos from the wedding on July 5, according to Jeff’s Facebook activity. In photos, the bride is seen wearing two different wedding gowns. According to CBS, she wore one for the ceremony and then changed to a now-viral MAGA-themed gown. She told CBS the wedding took place on the Fourth of July.

The dress that caught the internet’s eye is a white gown with “Make America Great Again” written across the length of her dress. Other photos show the bottom flare of the gown boasting “TRUMP” in red print.

Audra Johnson’s dress was designed by Andre Soriano, who has made other MAGA-themed clothes. On Thursday, Soriano’s official Facebook page shared a photo with the bride.

Johnson did not immediately respond to the Daily Dot’s request for comments but told CBS that she’d originally planned for the wedding to be patriotic-themed. Things took a different turn after the couple met Soriano, who suggested a MAGA theme.

It took Soriano four days to put everything together, Johnson told CBS. Her bridesmaids were in blue gowns, and she wore white and red. Her husband, a veteran of the Marines, wore his uniform and brandished a gun. Johnson herself posed with a rifle in one of her photos, and CBS reports other members of the wedding party did so, as well, though no shots were fired.

According to the couple’s Facebook and Instagram timelines, they’ve received both support and flak for the wedding theme.

“Looks like a trailer park threw up. I see much ridicule coming your way, enjoy,” one user commented on a photo.

Others congratulated them and shared their own love for the president.

But they’re taking it like most MAGA supporters: indifferent to what the world has to say and ignoring the implications of stitching rhetoric associated with intolerance and hate into a celebration of love.

“And the fun begins! Hehehe!” Audra wrote on July 6. “Best wedding gift ever! Watching them lose their shit is sooo amusing!”