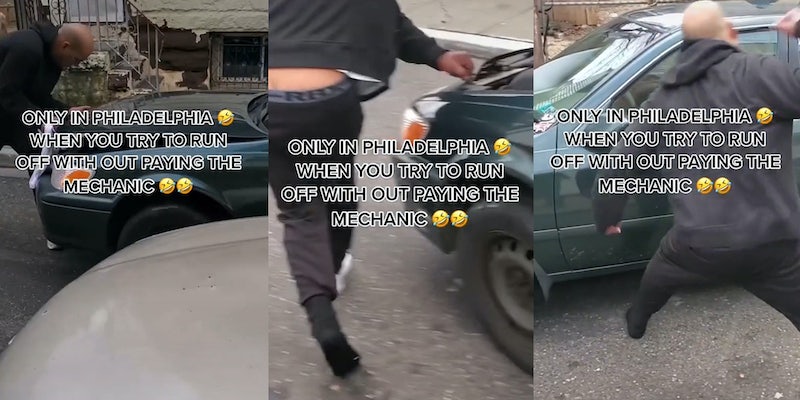 A viral TikTok posted yesterday sparked controversy after showing a man chasing a moving car and ripping out an auto part from its engine, apparently disconnecting the battery by ripping at the positive terminal. This was allegedly because the driver of the car wouldn’t pay his mechanic’s bill.

The video, which has over 7.2 million views and was posted yesterday by Eleydi Ruiz (@eleydiruiz), shows footage of a man yelling and trying to hold back a car from driving away. The TikToker claims the person driving away is a customer who tried to avoid paying his mechanic’s bill in Philadelphia.

The Daily Dot could not locate news stories about someone skipping out on paying a mechanic in the Philadelphia area. The video appears to be new and we could not locate the footage posted elsewhere online. In the background, someone is yelling in Spanish: “Se pago.” It’s unclear if this had anything pertaining to payment or was a curt pronunciation of “se apagó” which means “it turned off.”

In the footage, the alleged mechanic opens the hood of the customer’s car as it drives into him, and reaches into the engine to disable the car. He then runs to the passenger’s locked door and tries to open it to no avail. He decides to punch the window instead and injures his hand.

“I’m gonna fucking kill you! I swear to God,” the man yells at the person inside of the car.

“ONLY IN PHILADELPHIA,” Ruiz captioned the video. “WHEN YOU TRY TO RUN OFF WITH OUT PAYING THE MECHANIC.”

The video sparked controversy in its comments section about the man’s aggressive reaction. Some users came to his defense.

‘“Mechanics are hard working people, this ain’t fair at all,” one user said.

“Secure your bag king,” another replied.

On the flip side, many people made fun of the man for trying to punch open the car window.

“The window was stronger than my last relationship,” one user commented.

“People need to understand real life isn’t the movies. You will never find true love and windows are strong,” another joked.

One user advised requiring customers to pay up front.

“That’s why I’m the boss who takes payment 1st lol,” the user said.

Ruiz, the creator behind the TikTok, did not post a follow-up video or reply in the comments of her video to provide further details about the encounter.

The Daily Dot reached out to Ruiz via comment on their viral TikTok.