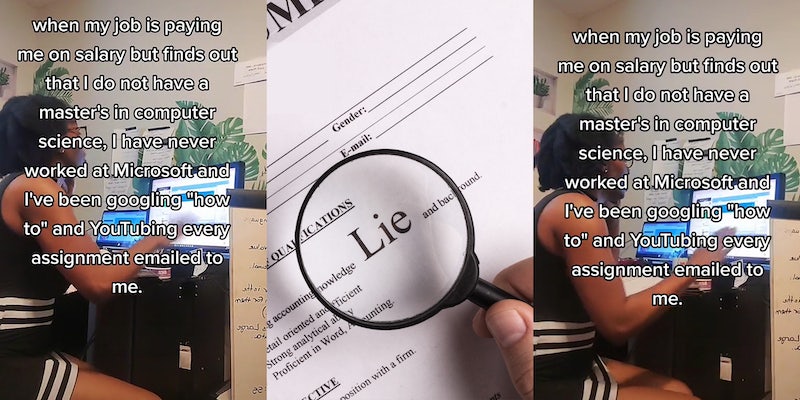 ‘I’m always lying about my experience’: Woman says she searches how to do every assignment emailed to her at work, sparking debate

'Get the work done and it's all that matters.'

A woman’s TikTok video about how she searches the internet on how to do every assignment given to her at work went viral.

Cinammin (@mscinammin) posted a video of herself yelling in front of a computer with a headset on.The video features a sound by Canyon Swing that repeats the phrase “let me tell you something.” The text overlay reads, “when my job is paying me on salary but finds out that i do not have a master’s in computer science, I have never worked at Microsoft and I’ve been googling “how to” and YouTubing every assignment emailed to me.”

@mscinammin how can I afford my new lifestyle is you send me back to Walmart. #corporatelife #careertiktok ♬ original sound – Canyon Swing – Queenstown 🇳🇿

The video has been viewed over 206,000 times since it was posted on July 11. People had mixed reactions, with the video resonating with some commenters.

“I’m always lying about my experience,” one person wrote.

“Ayooo these tik toks hitting a little too close to home,” another user commented.

“Damn I thought I was the only one doing this,” a third said.

Others even said that it shouldn’t matter, as long as the job gets done.

“you got the work done well and thats all that matters!!” one commented.

“But you’re getting it done so I don’t see the problem lol,” a second agreed.

Cinnamin shared in the comments about how she snagged the job without experience: “It works. they never truly check if you do the job right,” she stated, “I have friends with very well paying jobs thanks to yt. they have no credentials.”

In the follow-up video, Cinnamin posted the same video and another one attached to it. The video consists of her lip-synching, “gimme a chance” by JJ Icefish with the caption, “that’s how it feels.” The relay reads, “singing on my supervisors voicemail.”

Cinnamin isn’t the only person who has lied on their résumé. According to ResumeBuildier, one in three Americans admitted to lying on their résumés. 72% lied to improve their chances of getting the job. Other reasons include lacking qualifications (44%), being fired or left on bad terms by past employers (41%), and wanting to pad their résumé (40%). In fact, IT and finance workers are more likely to lie on their résumés than in other professions.