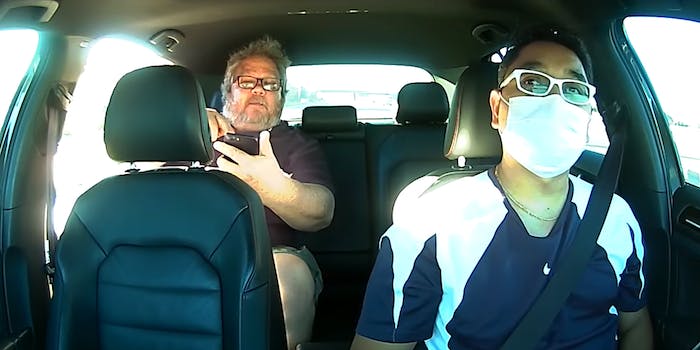 The passenger threatened the driver with violence for making him get out.

A Lyft driver was subjected to a racist rant from a rider after asking the passenger if he would wear a face mask in the car.

TMZ shared the driver’s video of the incident from late May. In the video, the driver explains that he wants passengers to wear a mask or cover their faces, adding that he’s had a family member who was sick with the disease. The passenger almost immediately turns hostile, saying that he believes the coronavirus is a conspiracy theory.

“I don’t like you,” the passenger said. “I told you I didn’t like your standards. I’m entitled to free speech.”

By this point, the driver has pulled over and told the passenger that he should get out. The passenger refuses to leave. He says that he has a “contract” with the driver that has not ended.

When the driver refuses to continue the ride, the passenger calls him a homophobic slur and begins to threaten him with violence, saying “I ‘ought to just f*cking crush your f*cking skull right now.”

The driver remains calms and reminds the passenger that he’s on video. The passenger immediately changes his tone of voice and asks the driver to just take him home. The driver refuses, saying he’ll call the police if the passenger doesn’t get out of his car.

The passenger tells the driver he doesn’t speak English and accuses him of not being from the United States, calling him a “f*cking w*tback.”

The video ends with the passenger angrily getting out and threatening the driver about talking to Lyft. The company told the Daily Dot that it has permanently removed the passenger from Lyft and has been in contact with the driver to offer him support.

“The behavior shown by the rider in this video is despicable and has no place on the Lyft platform,” a Lyft spokesperson told the Daily Dot. “Lyft is committed to maintaining an inclusive and welcoming community, and discrimination is not tolerated.”