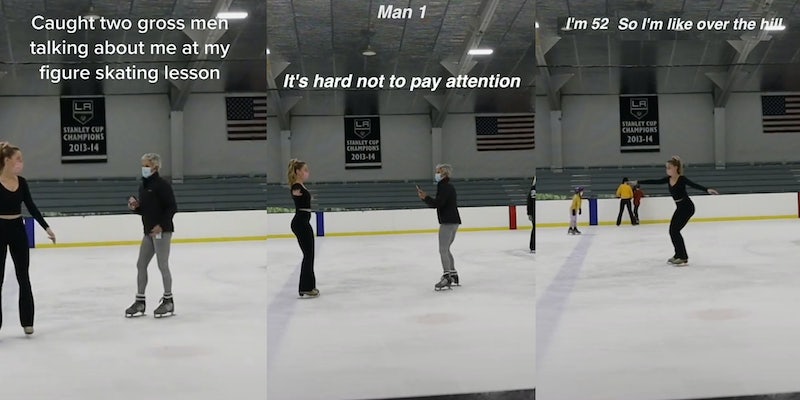 ‘I’m 52, so I’m like over the hill. You know, I could dream’: TikToker catches men inappropriately talking about her while she figure-skates

'Worst part is they're probably there for their young daughters, too.'

In a viral video, TikToker Luna Montana (user @lunamontana) captures two men inappropriately talking about her while she figure-skates.

“Caught two gross men talking about me at my figure skating lesson,” the text overlay reads. Montana’s phone was set up to record her lesson, however, it caught a conversation between two men, as well.

“She pretends she doesn’t know how to skate, but she’s skating not bad,” the first man says in regards to Montana.

“I haven’t been watching,” the other man responds.

“It’s hard not to pay attention,” says the first. The other agrees: “Well, I hear that.”

The first man then goes on to discuss Montana’s age. “The other girl is like half-naked. She looks like she’s only 15 years old,” he says. The man then back-tracks, saying she’s probably 17-years-old, but she looks 15.

“When you’re young, especially if you’re like a woman, you’re gonna try to express your sexuality,” he continues.

“I try not to look, because I assume everyone here is too young,” the other man says.

The video garnered over 5.7 million views, and several viewers in the comments criticized the man’s comments.

“The fact she’s almost completely covered with clothes,” another said.

“Worst part is they’re probably there for their young daughters too,” a third user said.

Others noted that the man admitted his comments were wrong, but continued to discuss it.

Some pointed out that the second man did not seem to engage with the other man’s comments very much. “The second man seem to be over it too honestly,” one user said.

However, one user argued that the second man’s passive nature made him complacent.

“The guy nervously laughing instead of calling him out is part of the problem,” they said.

The Daily Dot reached out to Montana via email.