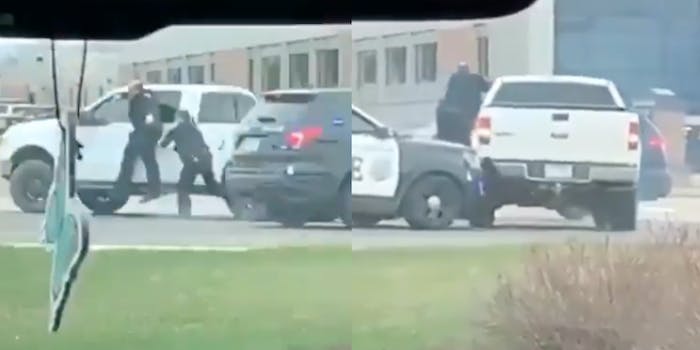 'It has nothing to do with noncompliance.'

A video of a 61-year-old white man dragging a police officer with his car is gaining attention online, with many pointing to the double standard they say it exposes.

Luke Alvin Oeltjenbruns was arrested and charged with first-degree assault after speeding off with the officer on the vehicle and allegedly striking him in the head with a hammer, according to FOX 9. The police were originally responding to an incident at a local Menards hardware store where Oeltjenbruns allegedly refused to wear a face mask and hit an employee with a piece of wood.

Twitter users pointed out that Oeltjenbruns, a white man, was not shot, tased, or otherwise injured when the police approached him. The incident took place in Hutchinson, Minn., about an hour away from where Daunte Wright, a 20-year-old Black man, was killed by Brooklyn Center police Officer Kim Potter on April 11. For many, Oeltjenbruns’ encounter with the Hutchinson police stands in stark contrast to the fatal shooting of Wright and serves as proof of systemic racism in policing.

“The 61 year old rammed his truck into the cruisers, took off with an officer hanging on the side, repeatedly struck the officer with a hammer while fleeing,” Twitter user @dina43920177 wrote. “This, Ladies and Gentlemen, is what White privilege looks like.”

“We live in a country where angry old white men and young white men carrying weapons and using them are safe – while young, unarmed black people who get pulled over with an air freshener hanging from their rearview mirror are shot and killed,” reporter Brian J. Karem tweeted.

“If police showed half this restraint in using lethal force, we’d have saved lives and livelihoods,” user @Taur_de_Force said.