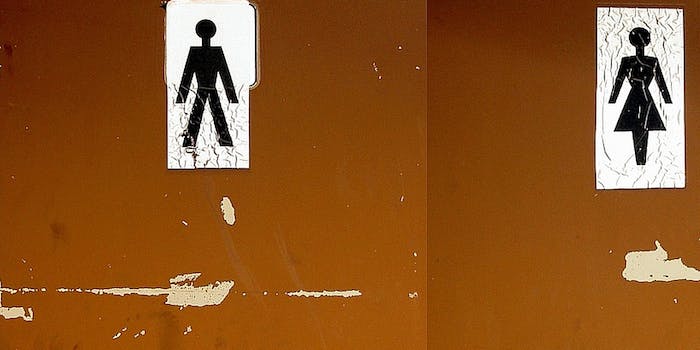 No joke is worth a walk of shame like this.

Being a good comedian often means keeping an open mind and seeking out new experiences. That’s probably why L.A. podcaster Ryan Broems decided to venture out of his comfort zone—we just wish he hadn’t done it like this:

Sometimes I do crazy shit in the name of comedy. Tonight I’ll be live tweeting a first date with a transgender I met on okcupid. #livetweet

Statements far less transphobic than that have become social media flashpoints, so it wasn’t all that shocking when Broems’ post called down the full fury of the Web. 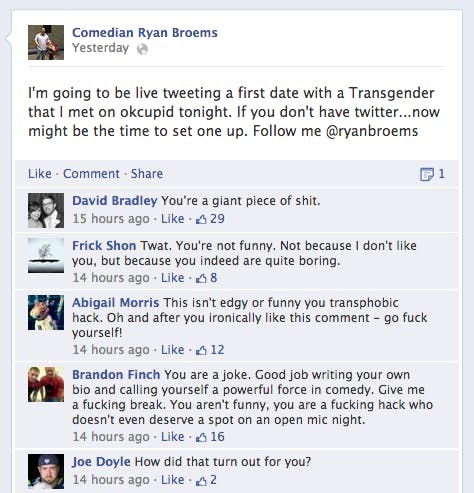 @ryanbroems what the fuck is wrong with you?

.@ryanbroems Dude if you are gonna’ forever brand yourself as a hate crime comedian at least tell some funny jokes.

It wasn’t Broems’ first time treading on thin ice when it comes to gender and sex, whether by making light of serious mental illness or tacitly endorsing the pernicious “friendzone” myth. 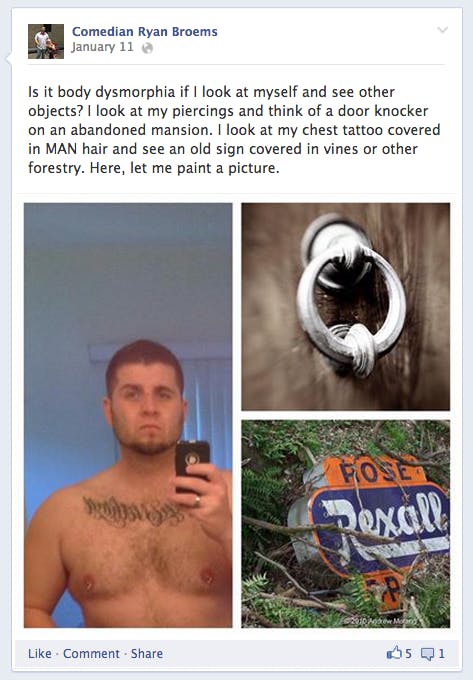 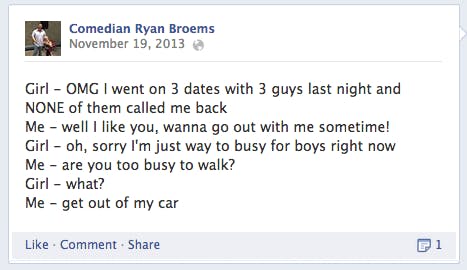 The date itself sounded like an innocuous affair, made cringe-worthy only by Broems’ commentary—which happened to shed light on some appalling views about women in general.

Jesus, she is 6’4″. I hope to god we don’t play basketball. I hate being beat by a girl with a dick #livetweet #trannygate

I popped the question! Her response, “Well, im not getting rid of it!” So the dick is in tact #livetweet #trannygate

She ordered a Budweiser. I ordered a Vodka Cranberry. I’m losing the man battle #livetweet #trannygate

She said she needed to use the ladies room AND WENT IN THE LADIES ROOM. I almost feel like telling on him #livetweet #trannygate

dude can pound a beer like a champ #livetweet #trannygate

No lie, she legit might be the prettiest girl I’ve ever been on a date with…ill give her that #livetweet #trannygate

When the backlash reached a fever pitch, Broems began to conciliate.

This was a bit gone wrong. I posted that I was doing it earlier and received no negative feed back. I apologize http://t.co/x2XauWTL8D

@kiimpulsively yes, completely made up. I did not realize Tranny was a derogatory word. I know many and they never expressed that to me.

Broems planned to issue a formal apology on the podcast I’m Burger at Skidrow Studios last night, but we reached out by email and received his official statement ahead of time.

I would like to apologize to the transgender community for my actions on twitter on the night of 2/12/2014. To be more specific, I apologize for my overall ignorance of the subject. I didn’t realize ‘Tranny’ was a derogatory word. I explained to an activist whom had contacted me that I have multiple friends who are transgender and they would always call each other “tranny bitch” jokingly, and she (the activist) explained that sometimes transgender women use the term as empowerment and in an attempt to ‘take it back.’ I did not realize that I would be causing such an uproar, but now that I have I would like to help the Transgender community to spread the word about the struggles they incur every day. I did not have any malicious intentions, and I sincerely hope we can turn this incident into a positive experience by helping to educate America on the topic of transgender life. Thank you to the fans who stuck by me, thank you to my friends who defended me, and thank you to the people who called me out on my ignorance…even though you called me Lunchbox McNeckBeard, I appreciate you opening my eyes.

Points off for the “some of my best friends are transgender” defense, and there’s an attitudinal problem over and above the inappropriate use of the word “tranny,” but it’s a start, anyway. Let’s just hope his next hypothetical OkCupid date—whoever it’s with—stays offline.