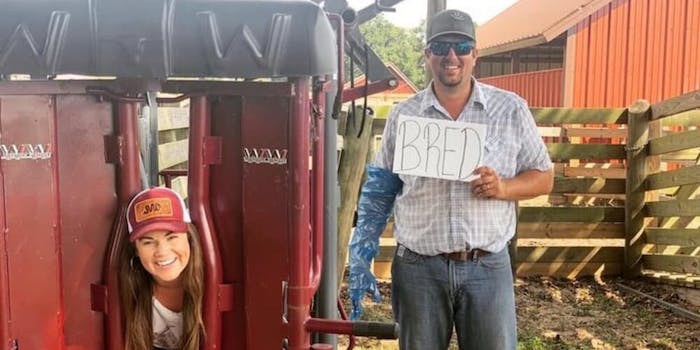 People are grossed out by cow insemination-themed pregnancy announcement

The announcement is drawing comparisons to 'The Handmaid's Tale.'

People are grossed out by a pregnancy announcement that many are comparing to The Handmaid’s Tale.

The woman featured in the announcement is seemingly pretending to be livestock as she peeps her head out of a cow insemination enclosure. The man in the photo is standing next to the enclosure and holding a sign that reads, “bred.” He is wearing a blue, plastic elbow-length glove, which is typically used to inseminate cattle.

The photo also made its way to other social media sites. “I’m one more awkward pregnancy announcement away from declaring emancipation from the whole human race,” a Facebook user wrote, along with the photo.

The announcement has prompted many disgusted reactions, with some explaining what the glove is used for.

“Sorry need to get this off of here,” Twitter user @BoltTheBee wrote, along with a meme of a woman scrubbing her laptop clean.

Is where they put cows for insemination. That's what the long rubber glove is for.

Super disgusting. Even for farmers.

Many seemed to agree with Wolfrum’s “the future conservatives want” caption and drew comparisons to Margaret Atwood’s The Handmaid’s Tale. “The Milkmaid’s Tale,” as one dubbed it.

In the Hulu series, fertile women are forced into sex slavery, and their sole purpose is to get pregnant and have children in Gilead.

“That feels like it could be from the more rural parts of Gilead in the Handmaid’s Tale universe,” Twitter user @jamesreb wrote.

That feels like it could be from the more rural parts of Gilead in the Handmaid's Tale universe.

With reproductive rights currently under threat in the U.S., many have expressed that The Handmaids Tale and now this pregnancy announcement hit a little too close to home.