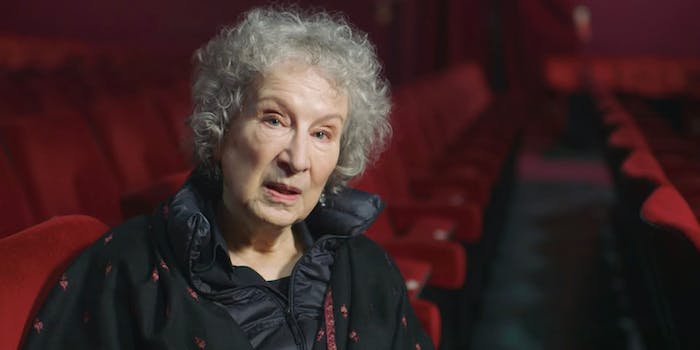 Margaret Atwood is writing a sequel to ‘The Handmaid’s Tale’

It will be set 15 years after Offred's last appearance in the original.

More than 30 years after it was first published, famed author Margaret Atwood is writing a follow-up to The Handmaid’s Tale.

Atwood made the announcement on social media Wednesday, revealing that her Handmaid’s Tale sequel will be titled The Testaments.

“Everything you’ve ever asked me about Gilead and its inner workings is the inspiration for this book,” she said in the announcement video. “Well, almost everything! The other inspiration is the world we’ve been living in.”

Yes indeed to those who asked: I’m writing a sequel to The #HandmaidsTale. #TheTestaments is set 15 years after Offred’s final scene and is narrated by three female characters. It will be published in Sept 2019. More details: https://t.co/e1umh5FwpX pic.twitter.com/pePp0zpuif

Although Atwood wrote The Handmaid’s Tale in the 1980s amid the rise of Reaganism, her iconic novel about a totalitarian theocracy where women have no rights and are forced to bear children for high-ranking men and their wives still resonates today. It’s even more prescient given that when Atwood first wrote The Handmaid’s Tale, she made a point of only including scenarios that have already occurred throughout history.

More recently, Atwood’s imagery and prose in The Handmaid’s Tale have weaved its way through pop culture and politics (the Handmaid’s uniform is a now-common sighting at protests in the Trump era), and Hulu’s TV adaptation is a hit with critics and audiences (the show has won 11 Emmys to date, including outstanding drama series in 2017). And with Atwood citing “the world we’ve been living in” as an inspiration, we can only begin to imagine just how much harrowing Offred’s dystopian world will become.

The Testaments is set to be released September 2019.