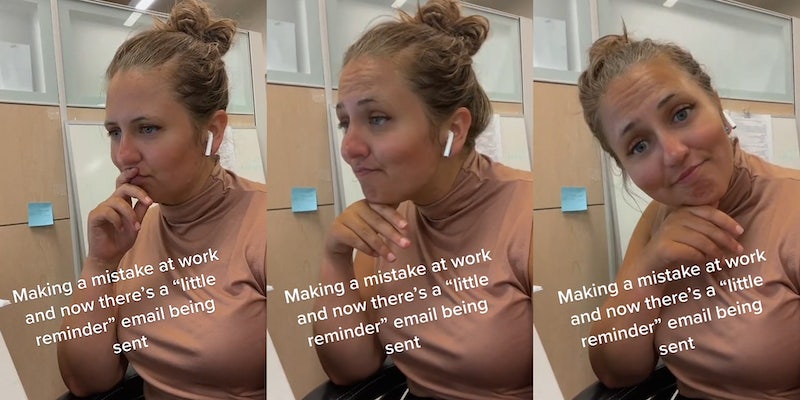 ‘And that’s on having a passive aggressive boss’: Worker says boss blasted ‘little reminder’ email to everyone after her mistake

Different people have different ideas when it comes to what makes a healthy, minimal-stress work environment, but there aren’t many who would argue having a passive aggressive boss is good for workplace morale.

TikToker Krista (@kristawilson26) shared a video in which she stares at her computer screen and then turns to the camera with a look of incredulity.

“Making a mistake at work and now there’s a ‘little reminder’ email being sent,” she wrote in the text overlay. Her caption further clarified, calling the email a “nice little public call out to make you never want to make a mistake again.”

Mistakes are inevitable in any work environment. More often than not, they’re hardly the end of the world and can be fixed by the supervisor who caught them, possibly with a reminder or explanation to the employee directly about what went wrong. Looping in others is a bold choice—and one that can feel designed to make a worker feel embarrassed, whether they were called out by name or not.

Viewers weren’t any more thrilled about it than Krista herself, and many admitted to dealing with similar situations in their own work lives.

“And I quit 24 hrs later especially since I was working after hours and the manager said my kids were probably distracting me,” @melbraxton wrote.

Another viewer pointed out that “mistakes are always noticed. The great jobs we do on the daily are not.”

“Why do bosses do this?!!” @sunlightenthusiast asked. “Just address it with the employee one on one. This has always rubbed me the wrong way.”

“And that’s on having a passive aggressive boss,” @idont_wanta added.

There’s a reason so many viewers resonated with Krista’s video. According to an analysis by MIT Sloan Management Review, which was cited by CNBC, one of the biggest reasons people quit their jobs is because of a toxic work culture, which was, in part, described as having an “abusive manager.”

Krista’s video has been viewed 1.5 million times since the end of July.

The Daily Dot has reached out to @kristawilson26 via TikTok comment.