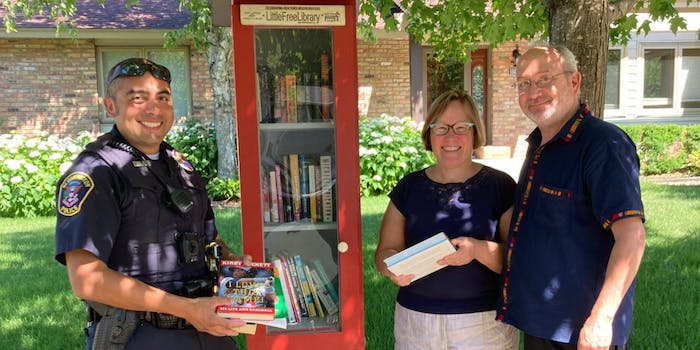 ‘The books are free’: Police department trolled after tweeting about ‘thefts’ from ‘Little Free Library’

'You do not need to share a book in order to take one.'

People are trolling a Minneapolis-area police department for a tweet reporting alleged “thefts” at a “Little Free Library” in Bloomington, Minnesota. You read that correctly: thefts were being reported at a neighborhood book depot in which the books are supposed to be free to take.

In the original tweet, the Bloomington Police Department tweeted: “After some thefts from little libraries in our city, officers and staff came together to donate a bunch of books to the libraries. Now people can use and enjoy them again.”

In a follow-up tweet, they doubled down on the idea that books at a “free” library could be stolen: “An individual was taking every book from the libraries. It is common that they are then sold for a profit which is not the intent for the libraries.”

Per the Little Free Library website, “They function on the honor system. You do not need to share a book in order to take one. If you take a book or two from a little library, try to bring some to share to that same library, or another in your area, when you can.” But if someone doesn’t replace books, it isn’t illegal to keep them.

Of course, people began to wonder and openly question the police’s actions and motives.

Book publisher Haymarket Books came with a suggestion and solution: “If you run a little free library (thank you) and you find it unexpectedly empty, please do not call the cops. We and many other publishers would be happy to help you refill it without putting lives at risk.”

Interestingly enough, according to a tweet by writer Tressie McMillan Cottom, there is critical scholarship on the “Little Free Library” system in a piece written for the Journal of Radical Librarianship.

Essentially, the theory suggests that “Little Free Libraries” were designed to look charitable, rather than actually be charitable. Often times, they are filled with “trash.” Thus, it was strange to some folks that the police would be called to defend one.

After the initial tweet went viral, the police department issued a statement, saying it should not have used the word “theft” to describe the taken free books.