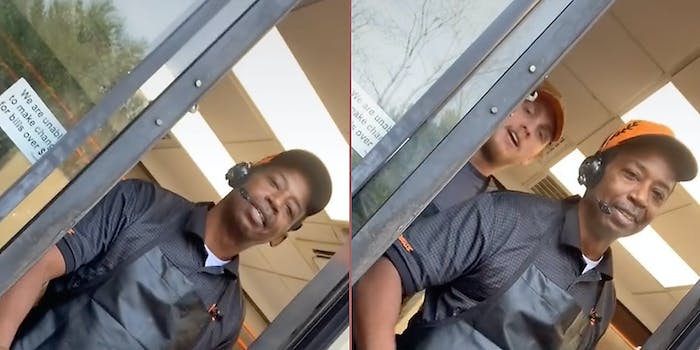 A TikToker ordered five pepperoni pizzas, five cheese pizzas, two sausage pizzas, and 10 orders of crazy bread in the drive-thru of a Little Caesars from her uncle, a worker.

The text overlay reads, “He was so mad. I was trying so hard not to laugh at the speaker.”

“That’s definitely my uncle,” it continues.

The labor shortage has left many businesses in the service industry understaffed, leaving the workers who are left to be overwhelmed. Viewers can hear the exasperation in her uncle’s voice as she ends the order with 10 orders of Crazy Bread, which, according to her uncle, was going to take a long time to make. Burris may have been aware of this, which is probably why she tacked it on to the end of her prank order.

“Ten hours of crazy… OK, ma’am, that’s going to take longer than it will to make the pizzas because there’s only two of us here,” her uncle tells her over the speaker.

She then pulls up to the drive-thru window and honks the horn. As she bursts into laughter, her uncle sees her at the drive-thru and looks extremely annoyed.

“Why you playing?” her uncle says. “Why you do me like that?”

When he realizes it’s his niece pulling a prank, he calls the other employee over, who has his sleeves rolled up.

“No way man. I was about to go crazy,” the other employee says.

Many of the 1,017 commenters found the prank hilarious and jokingly urged Burris to leave the workers alone.

“Austin was rolling up his sleeves was gonna pump those pizzas out,” @lagunarhino wrote.

“Ten orders of cray… he couldn’t even finish. He about to cry man!” @myss_dani424 said.

“He was really hoping you would cancel the order after he said it was only 2 of them,” @teeytee said.

The Daily Dot reached out to Burris via TikTok comment and Little Ceasars via email.