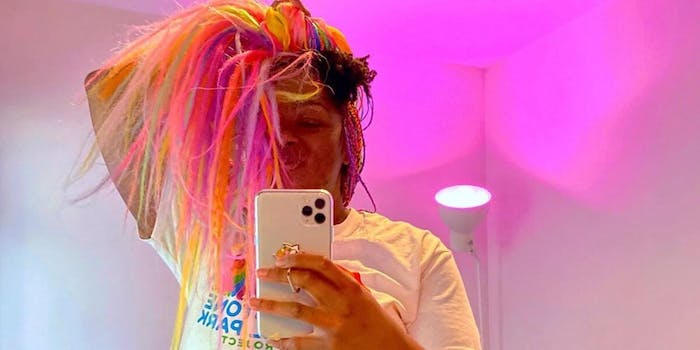 The company called the artist 'opportunistic.'

Lisa Frank is facing backlash for choosing the thick of the Black Lives Movement protests to respond to October allegations that the company stole from Black designer Amina Mucciolo.

Last week, Lisa Frank’s official Instagram account shared a photo showing a Black girl carrying a “Blck Lives Matters” poster, and wrote, “It’s incredibly hard to choose the right words to say in a moment like this. A moment in which no words can adequately describe the disgrace and injustice going on in our country. It’s disgusting, and we are angry, as all of you are.”

But the company was criticized on its posts for not responding to Mucciollo’s previous allegations.

In October, Mucciolo claimed that Lisa Frank Inc. stole designs from her work and that she was facing the risk of eviction as a result of publicity surrounding Lisa Frank’s work. (Lisa Frank did not respond to the Daily Dot’s request for comments at the time.) Mucciolo said that because both hers and Lisa Frank’s “pop-up” units were in the same facility, landlords were trying to evict Mucciolo in order to keep Frank’s unit as one of a kind.

It’s not clear if the incident led to an eviction. Mucciolo did not respond to the Daily Dot’s request for comments on Tuesday.

“Why didn’t black lives matter when your company stole a black artist’s creation, claimed it as your own, and then got her kicked out on the street when she called your company out for theft?” one user commented on Lisa Frank’s first post.

Despite the criticism, Lisa Frank uploaded a black square with the hashtag #BlackOutTuesday, which received similar responses.

“A black square doesn’t mean you’re forgiven or ‘woke’ for silencing a black creator,” one user said. “You are literally part of the problem. Following a trend doesn’t change shit.”

A day later, Lisa Frank posted a response to Mucciolo’s October allegations, referring to the Black designer as an “opportunistic individual taking that moment to focus attention on herself, for her own personal benefit, by repeating her false accusations.”

“Over the past months, we have silently forgiven her need to deflect blame away from her own failures by perpetuating this false narrative; however, we owe it to our fans to speak out this one time to address these lies,” the post said.

The post said the company’s artwork is “completely original” and dates back to the early 1980s.

“We had absolutely nothing to do with why her landlord evicted her from her apartment,” they said.

But people were upset that Lisa Frank would choose the middle of a national movement regarding Black lives to respond to the Black artist.

“It’s a sad day when your childhood hero’s become your peoples present day oppressors. as a creative person of color & friend to Amina this isn’t an attack on her, it’s an attack on all of us and it hurts,” one user commented. “It is still not too late to make this right but things like this make the road longer, and harder for everyone involved.”

Lisa Frank Inc. did not immediately respond to the Daily Dot’s request for comment.

On Tuesday morning, Mucciolo shared an Instagram post about different ways fans can support her current journey. “I just wanted to say thank you, and let you know that your support is both needed and deeply appreciated,” she wrote.