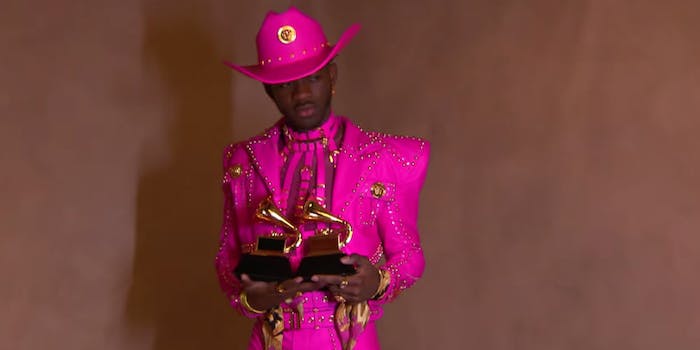 Pastor Troy seems to think outfit selection is what makes or breaks getting a Grammy award. The Atlanta rapper took a dig a Lil Nas X, a two-time Grammy winner, on Instagram Wednesday.

“Welp, Guess I won’t be winning a GRAMMY…If this what I gotta wear,” Troy wrote on Instagram, along with a photo of Lil Nas in the Grammys get-up.

Troy, 42, then continued his homophobic rant by alleging that LGBTQ people “love to push this shit on our kids” and something about Applebees being too gay for him.

Waitress at applebees: may I suggest the mozzarella sticks to start with?#PastorTroy pic.twitter.com/IkxzmJES3V

People online were quick to point out that an outfit is not what’s stopping Troy from winning a Grammy–or even being nominated for one, for that matter.

Pastor Troy went on a long, homophobic rant & somehow convinced himself that it’s the reason why he doesn’t have a Grammy. pic.twitter.com/nM2ggnV7Yt

Yes Pastor Troy…the ONLY thing keeping u from a Grammy is an outfit pic.twitter.com/plOppHNJRW

Pastor Troy: “this is why i cant get a grammy”

“Damn i look good in that pic on god,” he wrote.

damn i look good in that pic on god https://t.co/dIIKzTFa6X

This isn’t the first time Lil Nas has had to defend himself against homophobic trolls. After some decided to make homophobic “Old Town Road” jokes when he came out in June of 2019, he tweeted that “‘Old Town Road’ is literally about horses.”