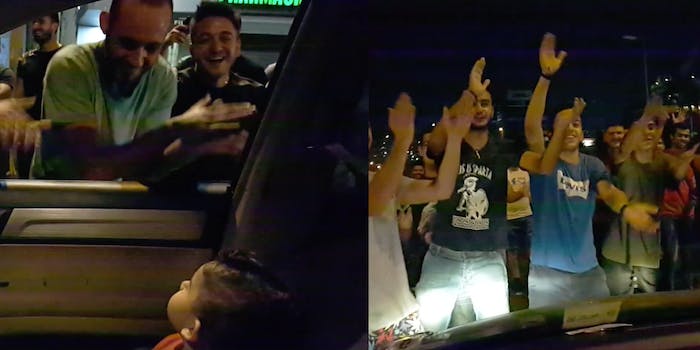 In a wholesome video circulating online this week, a group of Lebanese protesters burst out with popular children’s tune “Baby Shark” to soothe a toddler seated inside his mother’s car.

Eliane Jabbour was driving through Lebanon’s capital, Beirut, where massive anti-corruption demonstrations have halted the city since Thursday. Thousands of demonstrators have taken over the streets to demand reforms over financial crises that they say plagued the country under its current ruler. The protests were sparked by a proposed tax on WhatsApp calls but have since grown to highlight other concerns in the country.

Jabbour’s car was surrounded by demonstrators, and she asked them to not “be too loud” as she had her 15-month-old son with her, she told CNN. (Jabbour did not immediately respond to the Daily Dot’s request for comment.)

That’s when a crowd of protesters erupted in song, clapping and singing “Baby Shark” to the child through the car’s windows.

Jabbour posted a video of the incident on Facebook on Saturday and received more than 140,000 views.

Jabbour told CNN that her son knows the song, and he “hears it many times at home and laughs.”

The video reportedly went viral immediately after Jabbour posted it, and her husband found out about it before she could share it with him.

People on social media are extremely moved by the gesture, which only lasted a few seconds but has greater implications for the protesters’ humanity.

“At least when your son grows up, he will know some1 fought for his rights,” one commenter wrote on her Facebook post, “and did him animation along the way.”

It’s not the only positive celebration amid the massive protests. A video posted to Twitter on Tuesday showed protesters celebrating a woman’s birthday with a three-tier cake in the middle of demonstrations.

Protesters in Lebanon celebrating a birthday in the middle of the protest.