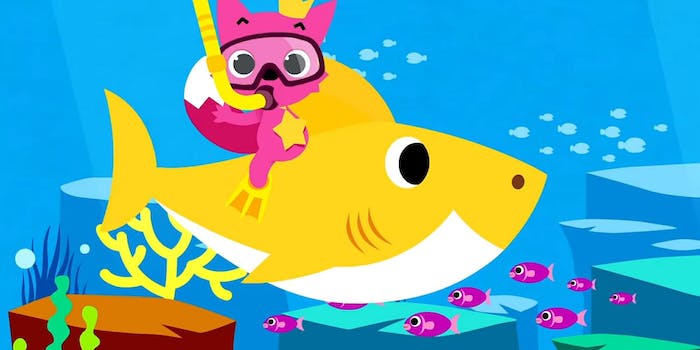 From R&B covers to strange men screaming the lyrics, the internet is obsessed with this summer camp jingle.

Do you remember going to summer camp as a kid and learning sing-along songs with your friends around a campfire? Maybe you sang “There Was an Old Lady Who Swallowed a Fly” or “Home on the Range” while eating marshmallows. You might’ve learned another camp song over this past summer, one that’s seen a resurgence on the internet this year: “Baby Shark.”

“Baby Shark” is a pretty simple and catchy camp song. One by one, the song introduces everyone in a shark family from the baby shark to grandma and grandpa shark, all the while having campers act out different motions with their hands to go along with each shark.

From there, the lyrics vary from version to version. In the more wholesome iterations, the sharks all get together and hunt fish, then the song ends. In other versions, the sharks attack sailors and kill them. One iteration popular at Christian summer camps even finishes with the dead humans going to heaven and partying with Jesus.

“Baby Shark” works so well as a children’s song because it’s easy to pick up, encourages kids to come together and sing, and relies mostly on nonsense words like “doo doo doo” to keep the beat. It’s fun to listen to and even more entertaining to perform. It’s also becoming incredibly popular with a new generation of children, this time through YouTube’s enormous children’s entertainment catalog.

Pinkfong is an incredibly popular YouTube channel that regularly posts nursery rhymes and children’s songs on the site. Their videos have particularly high production values, are incredibly upbeat, and are somewhat addicting to watch as a result. One of their most popular songs is, lo and behold, “Baby Shark,” with a whopping 1.9 billion views.

Pinkfong uploaded the “Baby Shark” song in 2016, and over the past two years, YouTubers have embraced it with a wide variety of “Baby Shark” adaptations and takes. Take Desmond Dennis’ “Baby Shark” R&B Remix, which sounds like Trey Songz and The Weeknd got together to introduce their own spin on the shark family. It’s catchy and hilarious in its own way.

Then there’s Frog Leap Studios’ metal cover of “Baby Shark.” That video features a man in a shark onesie singing the entire “Baby Shark” song while a little girl jumps up and down and flashes devil horns. It’s such a hardcore and intense take that it’s hilarious to watch in its own right.

There’s also a bunch of bizarre “Baby Shark” parodies. Just watch hunter1s1k’s YouTube video based on the Pinkfong version, where he screams the lyrics as loud as he can. It’s so hysterically chaotic that it’s scored nearly 1.3 million views on YouTube since it launched in late August.

“Baby Shark” is a pretty flexible song, and singers regularly swap out the lyrics to create their own versions. But some creators are better than others at writing “Baby Shark” songs, and with the wrong company in charge, the song can quickly fall apart.

Case in point: YouTube nursery rhyme group BillionSurpriseToys went viral with a bizarre take on “Baby Shark” that holds onto the rhythm but changes the words to a nursery rhyme called “Johny Johny Yes Papa.” In that rhyme, a father scolds his child for lying about eating sugar.

In most cases, singers share that nursery rhyme to a simple and calming melody, like “Twinkle Twinkle Little Star.” Instead, BillionSurpriseToys threw the “Johny Johny” lyrics into “Baby Shark,” slammed its father and baby son characters into a scene together, and animated the two of them dancing to a funky beat while Johny hides sugar and lollipops from his papa. The video was so awkward to watch that a meme was born.

My Twitter has pretty much become a Baby Johny meme account and you know what? I’m okay with that. pic.twitter.com/zHIX7oCh7n

It’s easy to see why BillionSurpriseToys’ video went viral. For one, it makes absolutely no sense. While “Johny Johny” is a story with a beginning and end, “Baby Shark” is more about the experience of singing a song together and enjoying all the words that come up along the way. Throwing the two together leads to some really uncomfortable sing-along moments. It’s painful to think about Papa repeatedly chanting “li-li-lies” and “o-o-open,” for “telling lies” and “open your mouth.”

Not just that, but the animation that goes along with the video is incredibly awful. Johny’s head is way too big for the rest of his body, the two dance awkwardly and inappropriately on stage together during a nursery rhyme, both characters look rigid and lifeless throughout the whole video, and nothing about the song makes the viewer feel warm and comfortable at the end. It’s a lot of stimuli all at once and pretty disturbing when put together. As Twitter user @b6ner put it after originally sharing the viral video in August: “i’m losing my fucking mind.”

While the original “Johny Johny” viral tweet’s video has since been struck with a copyright claim, the tweet itself remains, and it’s since earned over 110,000 retweets and 280,000 likes over the past year as viewers chimed in expressing their confusion.

Uhh what did I just watch? pic.twitter.com/g8C9uaz1NN

Why Johny is bigger than his dad 🤔😂😂

BillionSurpriseToys’ video isn’t funny just because it takes a childhood song and turns it into something terribly uncomfortable to watch. We expect nursery rhyme videos and sing-along songs to feel safe, innocent, and friendly. “Johny Johny” is haphazard, disturbing, and lazy, like someone quickly churned out the YouTube clip to make a quick buck. Conversely, the higher-quality “Baby Shark” memes are “grown-up” versions of our childhood soundtrack, whether that means belting out the song or turning it into an R&B hit that sounds more appropriate for 11pm than 11am.

When people hop on YouTube, Twitter, or any other social media platform, they aren’t just logging into the internet and scrolling through their Twitter feeds or YouTube subscriptions. They bring their past memories and experiences with them, including all those summer nights singing “Baby Shark” with their friends. For most of the internet, it’s fun seeing their childhood return through wacky, bizarre, and even disturbing YouTube videos. Whether the humor is intentional or not, it reminds us of simpler times—and why we’d never let our kids go on YouTube unsupervised.