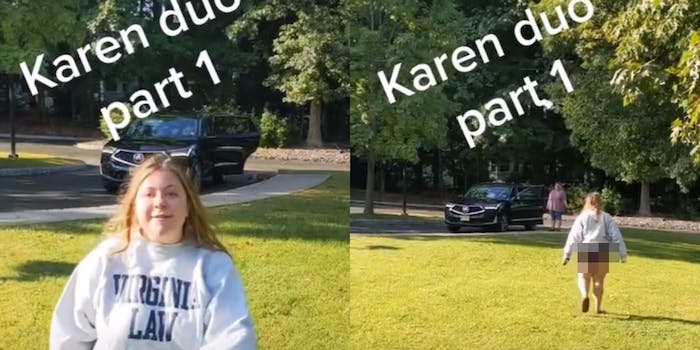 ‘Now I’m really calling the police on you’: Lawyer Karen loses her mind because she’s being recorded. But why?

A viral Reddit video shows a “Lawyer Karen” going near a man’s property and getting angry because she’s being recorded. They clash on the grounds of a church.

Subsequent TikTok videos suggest that the feud is tied to an argument on social media and a political sign on the guy’s lawn. Here’s what we know.

u/sadboylogan posted the video to Reddit’s popular r/PublicFreakout page, where it went viral this week, but it comes originally from Dave Timpanaro’s (@d_a_t_20) TikTok page. It’s an unusual scene because there’s no context as it why the woman, wearing a Virginia Law sweatshirt, is so brazen, though the comments section fills in the blanks.

“You want a call from my lawyers, Dave?” she said, walking up to the unseen man. The original TikTok video from Timpanaro boasts 1.5 million views and was posted three days ago.

“As you come on my property?” he replies.

“I didn’t—I sat in my car; you’re videotaping me,” she said. “Would you like a phone call from my lawyer?”

Pointing the phone toward an Acura SUV, he said, “Thank you, Eliza, for coming by. I told you once, leave me alone, don’t come near my home or it’s considered harassment. And here you are.

“Darcy, thank you for coming by.”

It appears that Darcy is the woman in the sweatshirt, and Eliza, the older woman, is with her.

In TikTok comments, Timpanaro says that they showed up at his home and took photos of his property “to show a police candidate’s sign.” He “likes” a reply that speculates that the two women are Donald Trump supporters. He also “likes” a comment saying that they put a board of education sign on his yard without permission.

Back in the video, the woman claims she’s calling the police on him, even as he walks away. It appears that he’s on the grounds of a church in Randolph, New Jersey, near his home.

The second “Karen” video focuses on Eliza. There are some telling exchanges between the two.

“Come take your sign off my property,” Dave tells Eliza. “I knew you did it.”

They argue about a social media post that Timpanaro made and apparently Eliza read. They end up yelling at each other, as he’s convinced they were coming to harass him at his house nearby. In TikTok comments, Timpanaro says he approached the women because they were harassing him and have harassed his family before. He clarifies that the church grounds are not his property but he’s referencing “the sign they put on MY PROPERTY.”

“You came over here with the intention of harassing me!” he yells.

In a third video, he explains that he got a “call from the police” who allegedly informed him the “Lawyer Karen” has tried to claim “sexual harassment” in an attempt to “try and get my livelihood taken away.”

In June, Timpanaro posted a TikTok with 800,000 views that showed an apparently racist reaction captured via home security camera to his Black Lives Matter yard sign. The text overlay on his video reads: “all bc I have a BLM sign… racists are so easily triggered.”

A Facebook page is associated with Timpanaro’s name, but it likely isn’t his actual page given the wild anti-Timpanaro and anti-progressive slander that decorates it. One commenter on the Reddit page for the second video said it was “some weird local political infighting,” without stating specifics.

The Daily Dot has reached out to Timpanaro, Eliza, “Lawyer Karen,” and local police.