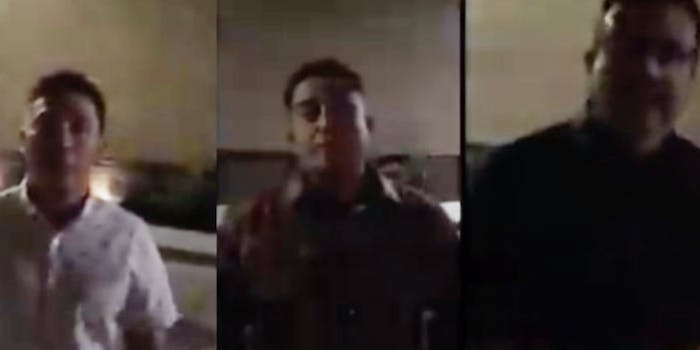 Video shows alleged LA police party at a Hollywood bar, with no masks in sight

The department is denying the allegations.

Footage that recently surfaced on social media appears to show Los Angeles Sheriff’s Department employees going to a bar party, despite the nation grappling with a rising coronavirus death count.

In the video—which is being circulated by a progressive activist group—several alleged sheriff’s department employees identify themselves on camera. Before stating their names and saying they have no fever, they go into the “LASD party.”

Though bars in California had to shut down in late June, one video shows people dancing in close quarters.

The venue where the reported event occurred, Sassafras Saloon, is owned and operated by the 1933 Group. In a statement to the Los Angeles Times, the group said that the “gathering was booked by an individual who wanted to honor a group of first responders.”

The group says the event was not planned by the L.A. County Sheriff’s Department and “cannot confirm whether LASD or LAPD were among those present.” Roughly 100 people were at the party, however.

The sheriff’s department is also denying that its employees are in the video and that it hosted the event.

“As soon as we became aware of allegations of deputies attending a party in violation of health orders, we initiated an inquiry in an attempt to validate the information or misinformation,” the department told the Times. “If further details are discovered and action is warranted, we will take appropriate administrative action.”

LASD later released a statement, saying, “The persons identified in the video are not employees of the Sheriff’s Department.”

The Times also reviewed the payroll records for the department and did not identify any of the men who identified themselves.