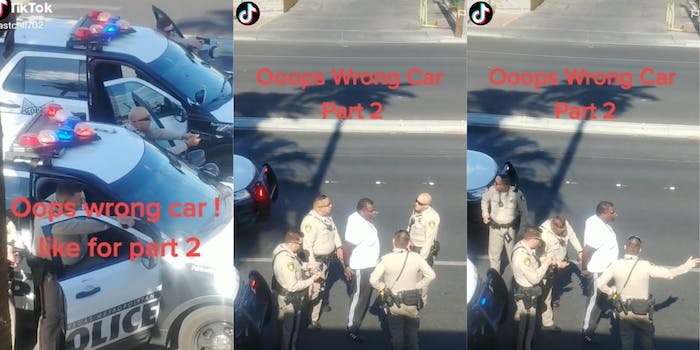 'They knew it was the wrong car and continued to point guns at them.'

Posted by @lastcall702, the in-progress video shows police with guns drawn on an unseen driver. An officer tells the man to take his seatbelt off and open the door. In short order, the videographer pans over to show at least five cars on an active scene.

Then, one of the officers admits, “It’s the wrong car.” One of the cops with his gun drawn asks incredulously, “What? This ain’t it?” After it is again confirmed to be the incorrect car, the officers continue to point their weapons toward the Black driver.

The driver appears angry after the Las Vegas police wrongly pulled him over. They ask him to calm down as they demand he walk back toward them.

“You got guns on me; what you mean, ‘settle down’?” yells the Black man. “That’s my house right there!”

Despite the mix up, in the following video, he’s briefly handcuffed by the cops.

After the Las Vegas police officers explain the mistake, the Black man tells them, “Just get me out of these cuffs and let me go about my day, please and thank you.”

This could’ve been a deadly situation for the Black driver, which isn’t lost to people in the comments.

“They knew it was the wrong car and continued to point guns at them as well as handcuff [him]…telling the victim to calm down,” @solipsusmsteve commented.

“This is why people won’t trust [police]; they know it’s the wrong car/person, and they still handcuffed him,” wrote jessicarangel1304.

The Daily Dot has reached out to @lastcall702 and the Las Vegas Police Department for comment.