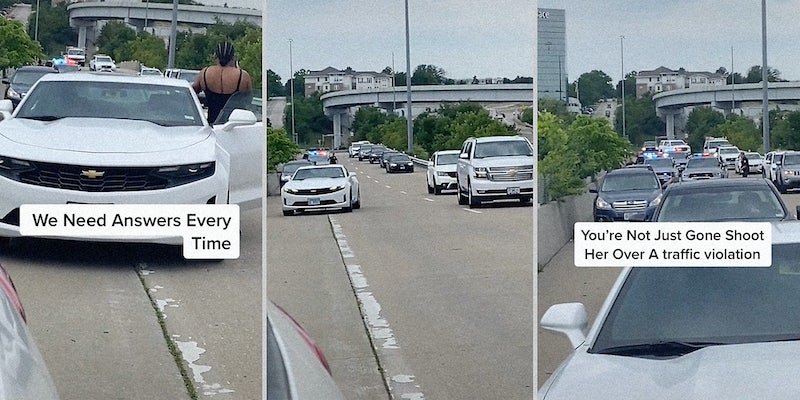 ‘They may have saved her life’: Police stop a Black woman—and countless cars pull over to check on her

'Every single person that pulled over did the right thing.'

A viral TikTok video shows people pulling over to film and ensure the safety of a Black woman who was pulled over by Missouri police.

The video is a document of increased awareness and agency in police interactions, with citizens coming together in a touching and essential instance of communal accountability for each other.

Posted by @sheniweird, the caption reads: “We have to start policing the police until things start making sense. In today’s world, it’s still unfair so here go!”

The video first shows the videographer backing up her car, getting a better view of the developing situation. Multiple police units pulled over a dark sedan on the highway near the CIBC Place building in Brentwood near St. Louis.

Suddenly, from a distance, the man, riding with the woman, is swiftly taken out of the car by Missouri police. (It’s unclear which police department was involved.) Drivers begin pulling over to investigate the situation.

“When I see a young African American woman screaming for help,” the TikToker says via caption and voiceover. “And it’s 3 to 4 White Police with guns drawn on her, and she’s unarmed, you damn right I’m showing up and showing out until I find out what it’s all about.”

“We need answers every time. She deserves the same respect homegrown terrorists got. You’re not just gone shoot her over a traffic violation. Not today.”

At this point, multiple cars can be seen pulled over, with the drivers out recording the incident, making sure the police understand there are eyes (and phones) on their every move.

As she walks up, a white man in Subaru, who had also been recording, gives her a thumbs up, indicating the situation would end with the woman and man safe.

Most of the comments highlight the efforts of the bystanders who potentially helped keep the woman unharmed. Police accountability has remained a significant issue since the slaying of Michael Brown in Ferguson. The state is currently reportedly deliberating a measure that many critics say reduces accountability for Missouri police departments.

TikToker @tonijames12 wrote: “Everybody pulling over; that’s what I’m talking about.”

“Every single person that pulled over did the right thing,” said @theresabuford. “They may have saved her life.”