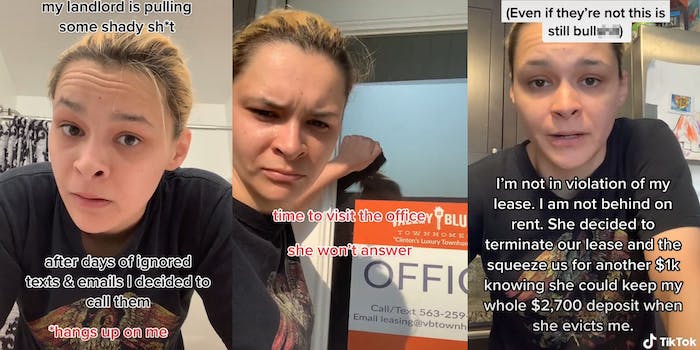 ‘My landlord is pulling some shady sh*t’: TikToker says landlord suddenly terminated her lease—then ghosted her

The creator says she will be filing a lawsuit.

In a series of viral videos, a TikToker shares her frustration in dealing with the landlord who suddenly terminated her townhouse lease. User Justine (@keen.justine) claims her landlord refuses to communicate with her about the sudden eviction. So, she took to TikTok to document the ways she attempted to navigate the situation.

In Justine’s original video, she records a phone call with her property manager where she asks for an explanation on the eviction letter. The landlord promptly hangs up after refusing to answer her question.

“My landlord is pulling some shady sh*t,” the overlay text reads.

Justine shares more context in several follow-up videos. She explains that while she signed a one-year lease with a previous landlord at Bluff Townhomes in Clinton, Iowa, the new landlord was terminating her “month-to-month” lease. According to one of the videos, Justine had been living at the townhouse with her wife for six months in “peace and quiet” before the new landlord served her the letter on April 27. Justine claims they had already paid for the month of May.

Justine states no reason was given as to why they were terminating her lease. In one of the videos, she writes that she was not in any violation of the said lease. Her videos show her attempting to call, text, and visit the leasing office to no avail. Then, she claims another letter was taped to her door. This time, the office was asking her to pay the rest of her second deposit. She says the letter stated that if she didn’t pay, she would have until May 13—not June 1—to get out.

“I said, ‘Sure, we’ll pay off the remainder of our deposit, but that means you won’t terminate our lease, right?’” Justine says in the TikTok. “And she won’t answer me.”

Eventually, Justine and her wife decide to visit the corporate office 45 minutes away. There, they speak to one of the owners who promises to get back to them by Monday.

Justine told the Daily Dot that at the time of publishing, the owners still had not contacted her. She also said via TikTok message that this wasn’t the first time they had problems with the same rental company. In 2018, her lease with the same company, Howes & Jeffries, was allegedly terminated, making this the second time they’ve “pulled some shady crap to push us out of a rental.”

Justine told the Daily Dot she personally thinks they are pushing her out because the company is anti-LGBTQ and is doing so as a favor to her abusive ex-husband. When asked whether she would take matters into her own hands, Justine said the couple will be filing a complaint with the Iowa Civil Rights Commission.

“We will also be filing a lawsuit for the thousands of dollars this is going to cost us,” she wrote.

In her last update video, Justine shares that the situation has given her an opportunity to look into purchasing a new home of her own. She told the Daily Dot that someone on TikTok even extended them a contract for a deed so they don’t have to get a loan.

In the video, she also thanks her TikTok viewers for urging her to get legal assistance and for offering financial assistance.

“I am genuinely floored and in awe at the outpouring of support my family has experienced,” she says. “You guys are amazing.”

The Daily Dot has reached out to Valley Bluff Townhomes via email contact form.