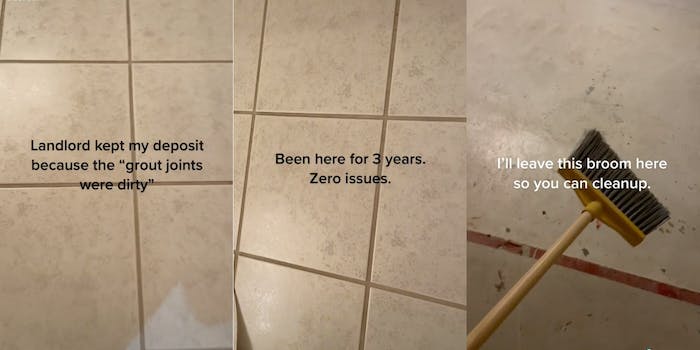 Between massive job losses, medical debt, and widespread fear over COVID-19, huge swathes of the American public found themselves in dire financial straights at some point during the pandemic, which has now stretched for more than a year and a half.

As some renters found themselves unable to make rent, and eviction moratoriums prevented landlords from forcing tenants out, some landlords lowered or outright forgave rent and assisted their tenants in finding a foothold despite the unprecedented times. Others reacted quite differently, raising rent prices and acting as though a virus wasn’t ravaging the entire world, and thus landlords became the first official villains of the pandemic.

A recent TikTok video documents a young tenant’s reaction to a landlord in the latter category, who allegedly chose to keep the young creator’s deposit over the most minor of details.

Shared to user @207eth‘s account, the TikTok is quite straightforward. It begins with a text overlay, in which @207eth—who goes by Ethan on his page—sets the scene. He alleges, via the overlay, that his landlord kept his deposit “because the ‘grout joints were dirty.'” The video makes sure to zoom in on impeccably clean floor tiles as this information is presented.

Rather than attempt to prove to his landlord that the apartment was genuinely spotless, Ethan chose the petty route.

Noting that he lived on the property for “3 years” with “zero issues,” Ethan provides viewers with a long look at the spotless floor that he lost his deposit over. Then, after setting a broom to the side so that his landlord can “clean up,” Ethan dives into a truly stunning example of petty revenge.

He takes a jackhammer to the floor.

Fitted with a special attachment clearly intended to tear up tile, the machine is stunningly effective. Another text overlay proclaims: “Here’s to your dirty grout joints brother,” before adding his pettiest well wishes to his landlord. “Good luck finding a better renter,” the overlay reads, as Ethan continues to tear up the floor in the background. The caption for the video notes that there is “nothing like the greedy upper class.”

In the comments section, viewers shared their concerns over the legality of Ethan’s actions. Numerous commenters said that “now (the landlord is) just gonna press charges.”

Not everyone was concerned about the potential legal repercussions of Ethan’s video, however. A huge chunk of the comments section is dedicated to supportive viewers who jumped on the landlord hate train. Like one viewer, who wrote that “there’s bad people, there’s evil people, and then there’s landlords.” Another, agreeing with this sentiment, informed Ethan that “us humans get big petty over our deposits and I love it.”

The comments section, past warnings about possible legal repercussions and the occasional supportive message, eventually turned into a discussion about viewer’s previous issues with landlords. Dozens of people shared their own landlord woes.

In a follow-up video posted the day after the first went up, Ethan responded to a commenter who said that “he’s a bad landlord, but now you’re a criminal. Hope it’s worth the sentencing you’ll receive.” In a thoroughly zen reaction to this note, the video sees Ethan walk into a desert-like landscape with a University of Arizona flag. He holds the flag up for the camera, briefly, before laying down on the ground, surrounded by cacti, and draping the flag over himself like a blanket. A caption for the video gushes over the TikToker’s excellent “view.”

The Daily Dot reached out to Ethan via TikTok.