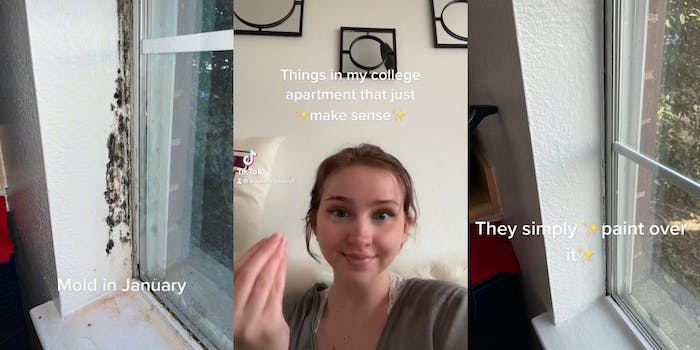 ‘Get out ASAP’: College student says landlord painted over black mold instead of addressing the issue

In a viral TikTok video, a college student shows what appears to be black mold growing in her apartment, but she says her landlord painted over it before finally addressing the issue.

Brooke Fortinberry (@brookefortinberry1) shared the video with pictures of mold growing in one of her windows on March 29. Her first image was dated back to January, and photos taken two months later showed that mold had started growing on her shoes and continued to grow in the window no matter how much she cleaned.

“They simply paint over it,” she wrote via text overlay of her apartment complex, showing off her freshly painted walls. “Help.”

The video received over 6.8 million views, with many users slamming the apartment complex for not addressing the situation and offering up suggestions for Fortinberry.

“Call them and tell them you are hiring a mold inspector. I saw someone else on this app do that and the landlord ended up having to pay for it,” another added.

A third viewer claimed that their aunt died from black mold, calling it “way more serious than you think.”

While the panic over black mold is overblown to a certain extent, according to Healthline, it can still cause problems for people who have allergies or sensitivities to mold, as Fortinberry notes that she does. For people in those categories, symptoms can mimic colds or create problems breathing. The health information site notes that “people who are very sensitive to black mold may develop severe respiratory issues when exposed.”

A month later, Fortinberry posted an update, saying the apartment “finally took [her] seriously” and brought in an “industrial-sized dehumidifier” to try to rectify the problem. She then moved to a different room in the same building and discovered mold on more of her things in the process. However, she says the change in location made a big difference in how she’d been feeling, which she says confirms her health fears about black mold.

Her latest video suggests she’s currently exploring options to make sure that her new room in the same building is safe, although she says she’s had issues contacting the Mississippi State Department of Health in the past.

“Just blow up the issue,” one user suggested. “Send it to the local news. I work at a university. They will panic if they think it will affect their $$$$/enrollment.”

The Daily Dot has reached out to Fortinberry via TikTok comment.