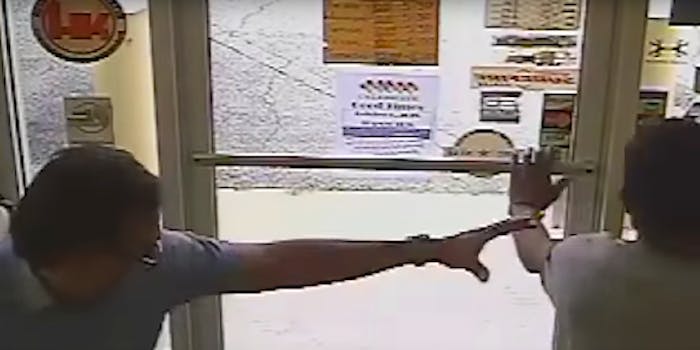 Police are investigating whether the shooter should face charges.

Police in Lakeland, Florida, have released disturbing surveillance footage of a city official fatally shooting a man who tried to shoplift from his store, Vice News reports. The video’s release on Monday came as police are trying to determine whether the shooter should face criminal charges.

The footage shows Lakeland’s city commissioner Michael Dunn, who owns Vets Army & Navy surplus store, shooting 50-year-old Cristobal Lopez. According to police, Lopez was in the store with his father, who made a purchase as Lopez took a hatchet and concealed it before trying to leave the store. Dunn saw this unfold, and the video shows him grab Lopez by his shirt as he’s attempting to walk through the exit.

In the 38-second clip, Dunn can be seen drawing his gun, shooting Lopez at close range, and then watching him die on the ground just outside the door.

Lakeland police told Vice News that no charges have been filed, but an investigation is underway. Officials are trying to determine whether Dunn’s actions fall under Florida’s stand your ground law, which says a person can use deadly force if they believe their life or someone else’s life is threatened.

The Tampa Bay Times reports that Dunn, 47, is a gun rights activist and hosted a rally to counter a March For Our Lives protest organized by Parkland shooting survivors in July. According to the Lakeland Ledger, Dunn accidentally shot a man when he was 19, but the victim survived.