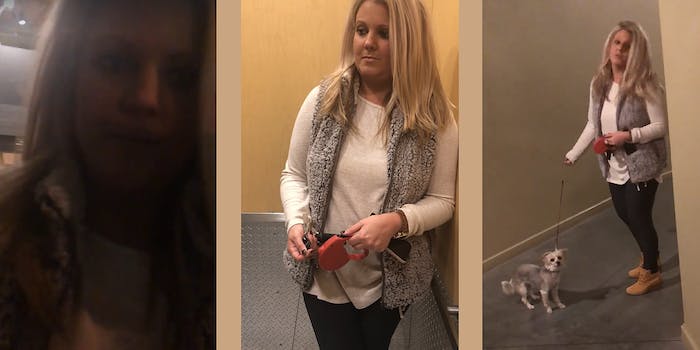 She went as far as following him to his door and calling the police, even though she saw his keys.

In the latest of so many instances of white people calling the police on black people for existing, a white woman tried to block a Black man from entering his own condo building, and then called the police.

D’Arreion Toles was simply trying to go home when he found himself being interrogated and blocked by a white woman, now identified as Hilary Brooke Mueller, who refused to believe that he lived in the building.

“Please move, ma’am,” Toles says at the beginning of the video he posted of the interaction on Facebook.

“Do you live here?” Mueller asks. Toles repeatedly tells her that he does live here, that he already swiped his key fob. She demands to know what his unit number is. “I don’t need to tell you that information,” Toles calmly responds. He eventually tells Mueller the floor he lives on, and she still refuses to let him in, moving the goal posts to “if you have a key fob.” He can be heard jingling his keys, presumably to show her that he has met her new requirement. She still refuses to move.

Eventually, Toles gives up on trying to negotiate and pushes past Mueller. She then follows him to his floor and starts changing her story. “I would like to know whose friends, and why you are here,” Mueller says when Toles asks why she is following her.

“And if you do, then I would like to meet you because you’re a neighbor,” Mueller says.

“You didn’t start out on a good note,” Toles responds. “I’m going to my house, where I live.”

As Toles films Mueller continuing to watch him while he has his keys in his door, she attempts to act as if she was just introducing herself. “As a record, I just want to say hi, what is your name, and I’m not—.”

Toles does not let her finish. “Ma’am—you just—no. Have a good night, ma’am,” he says. “Don’t ever do that again.”

Toles said the police arrived at his apartment 30 minutes later and Mueller claimed Toles was making her uncomfortable. In other words, even though she saw him enter his apartment with his keys, she still believed he was suspicious.

Mueller was an employee of the real estate company Tribeca-STL until this weekend. After reviewing the video Toles posted, the company released a statement saying she was fired, and that it will “never will stand for racism or racial profiling at our company.”