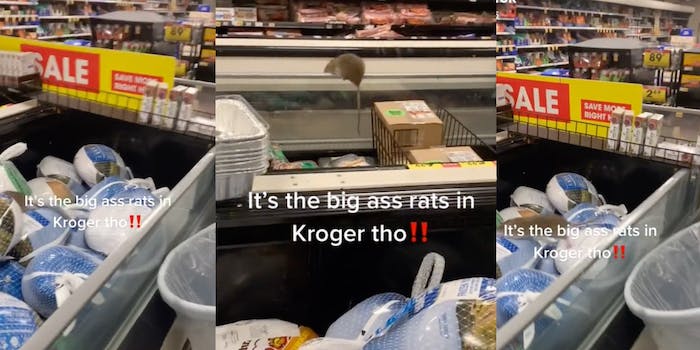 'If I seen that I'll walk out expeditiously!'

A video showing a large rat running through the packaged turkeys at an Atlanta Kroger has garnered 2.8 million views on TikTok.

Posted by @dblack15, the video shows a Kroger employee trying to coax the rat into a trashcan from atop a turkey, before it turns around and runs away, disappearing without a trace.

Commenters on the video took the opportunity to crack many jokes about the situation.

“Nah he works there, just inspecting the turkey to make sure they haven’t expired,” one commenter wrote. “He should get a raise.”

Others expressed pure disgust, asking the poster of the video which location the video was taken at so that they can avoid it.

“If I seen that I’ll walk out expeditiously!” one commenter wrote. “And never shop at that location again.”

Others thought the move to try and hold the trashcan near it was odd.

“Y’all thought it was just gonna hop into the trash can or (something)?” one commenter wrote.

More jokes centered around references to the Disney film Ratatouille, in which a rat becomes a chef by working his way into a restaurant.

Another commenter wrote that rats, as well as roaches, are in more places than people might expect.

“Evert place has rats and roaches!” the commenter wrote. “They come out when we go! I’m saying every facility including day cares and bread, nut factories and water and soda.”

The Daily Dot has reached out to @dblack15 via TikTok DM regarding her video of the rat, as well as to Kroger.