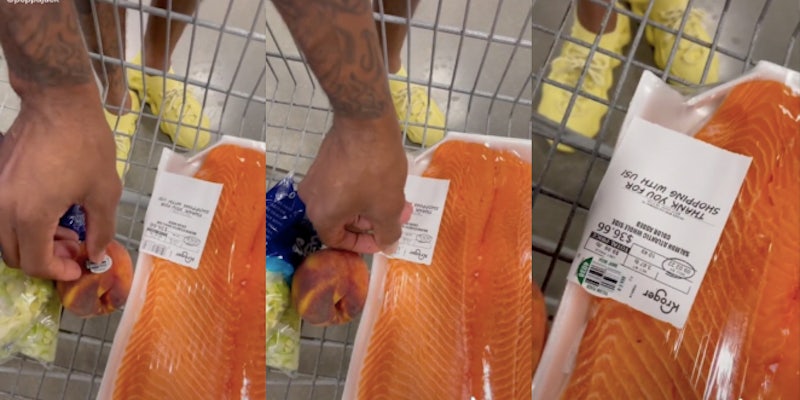 For years, there’s been an unethical pro tip floating around the Internet. If one wants to get their groceries at a lower price, the tip says, simply bring the item to a self-checkout and ring it up as bananas.

The “banana trick” has become so widespread that numerous publications, ranging from mainstream outlets like the Atlantic and the Guardian to industry-specific outlets like Loss Prevention Magazine, have documented the practice.

While the topic of shoplifting is seeing increased debate on the internet, stores seem to be taking the act more seriously. Stores like Walmart have gone after shoppers for accidentally forgetting to scan items or, in some cases, just appearing to have not scanned an item, with many of these supposed wrongdoers facing store bans or hefty fines.

Despite this, many are still offering their own version of the banana trick, with one iteration going viral after it was posted to TikTok.

In a video with over 22.6 million views, TikTok user Kev (@poppajack) shows a Kroger grocery cart containing both a peach and salmon, the latter of which is priced at $36.66.

Carefully, the person in the video removes the peach’s barcode and places it over the salmon, presumably with the intent to save money at checkout.

“They’re never gonna know, how would they know,” Kev wrote in the caption.

@poppajack They’re never gonna know, how would they know 🤪#fyp#tiktok#foryoupage#viral#funny#duet#trending#love#ReTokforNature ♬ Funny Laugh no no no – Sound Effect

While the video is likely a joke (and as users noted, the plan would most probably be foiled during the weighing process), that did not stop commenters from sharing their own stories of grocery theft.

“Walmart discount! … if I have to scan and bag my own groceries then I’m going to apply my own discount,” wrote one user.

“Me at Whole Foods getting lamb chops but scanning them as lemons,” added another.

“Getting fillet steaks cut from the butcher not in the packets…weigh as onions…absolute bargain…” stated a third.

“My cuz says he uses a koolaid packet when he buys steaks,” shared a further user. “I am not brave enough to try.”

However, some users were quick to remind TikTokers that these actions have consequences.

“I’ve seen people get arrested at stores for this,” warned an additional TikToker.

Update 10:38am CT, Sept. 28: In an email to Daily Dot, Kev said he was inspired to make the video by other TikTok videos and that the video was indeed a joke.

“This was my first time swapping barcodes,” he continued. “Let me make it clear: I did not leave the barcode on the salmon, I removed the barcode and placed it back on the peach. I then went to a register where an employee was present and I paid $36.66 for the salmon.”