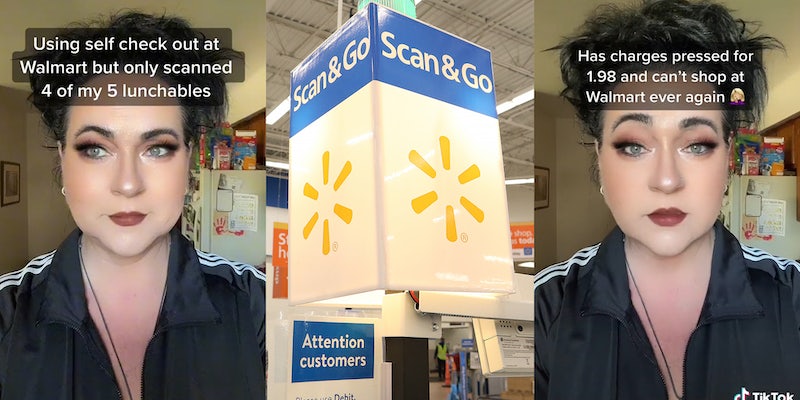 ‘This is exactly why I won’t use self-checkout’: Walmart customer says she was charged, banned for life after forgetting to scan 1 Lunchable

'So never use self-checkout again. Got it.'

Earlier in the year, an attorney went viral after warning users against using self-checkout machines. In her video, she argues that loss prevention units in stores were cracking down, inadvertently leading to people who forgot to scan an item facing considerable consequences. In some cases, she says, the person may not have actually stolen anything at all; still, these people may accidentally face the fullest extent of the company’s legal might.

Now, it seems her warning was an apt one. A TikTok user recently went viral after claiming that she had charges pressed against her and received a lifetime ban from Walmart after forgetting to scan one of five Lunchables at a self-checkout machine. According to user Barb (@fleegus159_barb), each of these Lunchables cost just $1.98. That price tracks with the price listed on Walmart’s site.

This is not the first documented case of its nature. In May of this year, Tucson, Arizona-based ABC affiliate KGUN9 ran a story about several people who claimed they were cited for mistakes at self-checkout machines.

KGUN9 interviewed one woman who claimed she simply forgot to scan some items at a self-checkout.

“Out of the shadows, two women just jumped out at me and grabbed the cart and ushered me all the way back across the store, into a tiny little interrogation room…and told me I was being arrested for shoplifting,” she recalled. “They proceeded to hold me there. For about an hour and a half. They called the sheriff. They said because it was over $30 they would have to arrest me. I’ve never been arrested in my life. I’m in my 60s and they were just very rude and inconsiderate and I kept asking them to explain things because I didn’t understand what was going on.”

Local counselor Sandra Barger was also interviewed for the piece. Barger claimed she took notice of the trend after observing a large number of petty theft complaints levied against people who “weren’t her typical petty theft clients,” per the article.

“It’s the same story. You know, I’m standing there scanning, I have my children with me. I have one client that had his kids with them…And it was just the simple one item that he missed, which can happen you know, anyone can do that,” she detailed. “I have another client that is a business owner that purchased over $2,000 in items and one item is what he missed and he got cited for that.”

On TikTok, users took Barb’s video as a warning against using self-checkout machines.

“So never use self checkout again. Got it,” wrote one user.

“This is exactly why I won’t use self checkout,” @miracleformax added. “way too much liability.”