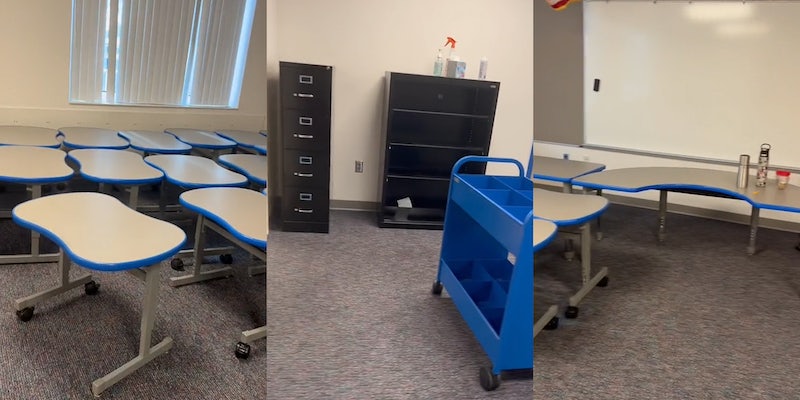 ‘How much of my own money am I expected to spend?’: Teacher’s video of empty Kindergarten classroom sparks discussion of teacher pay, room furnishing responsibility

Teachers will spend an average of $500 to furnish their classrooms, according to the NEA.

A teacher’s series of videos on TikTok has drawn viewers into a discussion about teacher compensation and the responsibility of furnishing a classroom with books, shelves, visual aids and other classroom staples.

Posted by @progressivemama, the first video shows a classroom bare except for chairs, desks, a white board and cabinets. The video has been viewed more than 337,000 times.

“So frustrated going into my classroom today,” the video is captioned. “No shelves for a classroom library. The desks are weird for a Kindergarten class.. No cabinets. No rug. No left over supplies or books. How much of my own money am I expected to spend?”

@progressivemama So frustrated going into my classroom today. No shelves for a classroom library. The desks are weird for a Kindergarten class.. No cabinets. No rug. No left over supplies or books. How much of my own money am i expected to spend? My wishlist is in my bio. #SplashSummerVibe #FilmTeyvatIslands #TurboTaxAlphorn #teachertiktok #clearthelists ♬ original sound – Progressive Mama

@progressivemama also wrote in her caption that her wish list, which allows people to purchase items for the classroom, is in her bio. Teachers across the country use Amazon wishlists each year to ask for assistance in furnishing necessary items for their classrooms each year.

In a second video, @progressivemama shares that her classroom was able to be fully furnished with some of her personal money as well as “tons” of donations, taking the white walls and gray carpet and covering them in rainbow-colored educational diagrams, books, and supplies strongly associated with being in a kindergarten classroom.

Some suggested that @progressivemama should be happy with the space she’s received, pointing out that they’ve had less to work with in other schools.

“I’ve moved five times in 16 years and NEVER had such a clean, quality space to work with,” one commenter wrote. “That furniture is amazing! I guess everything is relative.”

“That room is clean with nice desks, tables, and storage,” another commenter wrote. “Count your blessings. I have been in rooms with holes in the wall and floor with mice, insects, mold.”

“That’s pretty nice stuff for being new,” a commenter wrote. “I had a broken cafeteria table.”

In response to such a commenter, @progressivemama wrote that it was nice to have the furniture that she did, but it is not all that is necessary in a classroom for kindergarteners.

“It is nice but not at all what a kindergarten class needs,” @progressivemama wrote. “And the shape of the desks are really odd. Makes it difficult to group together.”

According to the National Education Association, teachers will spend an average of nearly $500 to finish furnishing their classrooms and on school supplies for their students.

Many commenters urged @progressivemama to leave her classroom in this state for the start of school, and allow parents to see what teachers are provided, with some insisting that she shouldn’t have to pay out of her own pocket to provide for her students.

“Harsh route-leave it plain and blank and when admin and PARENTS question whats going on maybe admin will provide,” one commenter wrote.

“I seen a teacher on here saying they don’t buy anything extra and only use what the school provides,” another commenter wrote. “Start doing that, don’t complain about spending.”

“I think it has to get to the point where we all collectively stop funding our rooms ourselves and let the schools see what happens when parents walk in,” a commenter wrote.

The Daily Dot has reached out to @progressivemama via a comment on the video, as other methods of contact were not available.