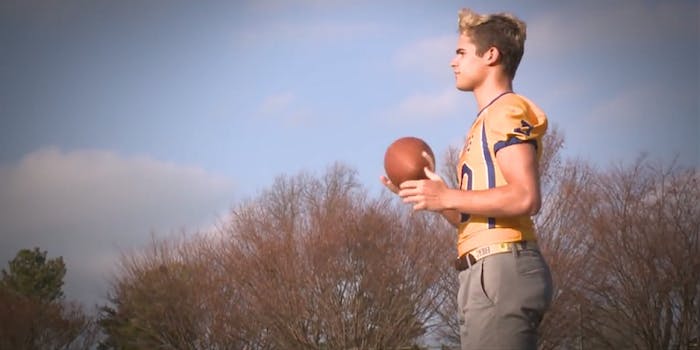 After Westboro Baptist Church targets gay football star, students fight back with a rally of their own

The community and the internet #StandWithJake.

The Westboro Baptist Church just learned a valuable lesson: Don’t mess with gay athletes. After the notoriously anti-LGBTQ church decided to target an openly gay football player, his classmates came to his defense in droves—and so did the rest of the internet.

Star running back Jake Bain plays for Ladue’s John Burroughs School, a Missouri prep school that made local news late last year when Bain came out as gay. In February, however, the Westboro Baptist Church decided to target the school, vowing to picket the campus on Monday, March 12, for its “smirking, proud fag child.”

So in response, over 200 students met to put together a counter-rally against the church with a “display of support” for the school’s queer community. John Burroughs’ headmaster Andy Abbott went on to defend the initiative, sending out a letter to the school’s families on March 8 in which he praised the students and called the Westboro Baptist Church “nothing more than a hate group.”

“To be frank, our students want to own this day,” Abbott told parents, FOX 2 reports. “They have crafted a response to the WBC which avoids engaging with the WBC. Instead, their focus is on taking care of one another and celebrating the inclusive community they are building for all students at Burroughs.”

A hashtag called #StandWithJake was also created for the counterprotest, which has since gone viral as Twitter users near and far have celebrated Bain and his classmates.

There's a special place in hell for people who show up and protest hate at John Burroughs school. #StandWithJake

At @EthicalStL we #standwithjake and against hatred! We support the @JBSchool community in their effort to celebrate diversity and inclusion! pic.twitter.com/IbVXNc9GH5

One report from local station KSDK’s Abby Llorico suggests the Westboro Baptist Church didn’t even show up for the picketing, most likely because the church realized they’d be outnumbered. Meanwhile, local businesses unaffiliated with the school have stood up for Bain, making sure the church doesn’t feel welcome if they ever step into town.

The crowd of support for @Jakebain10 outside @JBSchool keeps growing; I talked to a mom+14 year old son who came from St. Charles this morning to #StandWithJake.
I haven’t seen anyone from Westboro Baptist Church yet. pic.twitter.com/rXOOFSf5lT

This morning in Ladue was amazing, so much love and support. The businesses in Ladue even had rainbow flags and supportive signs. #StandWithJake #StandWithJBS pic.twitter.com/aY1ooXUVKf

We are proud to #standwithjake as we light the sky in rainbow!! pic.twitter.com/dJRrwZ0MOo

As for Bain, he was initially concerned about the Westboro Baptist Church’s appearance at the school, but all the support he’s received has alleviated much of his fears.

“I was able to realize that if this international hate group is coming after me and my community, then we must be doing something right,” Bain told Fox 2.