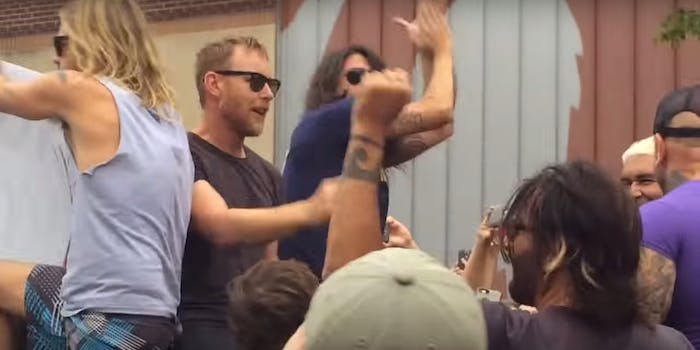 The Summer of Foo shows no sign of stopping as Foo Fighters used their powers for good to serve up some old-fashioned trolling towards the Westboro Baptist Church.

The band’s latest stop in Kansas City, Missouri, on Friday afternoon brought the members of the church to the Spring Centre to protest the band; the church’s m.o is to protest high-profile events such as soldiers’ funerals. The WBC carried their usual signs full of hateful messages when the Foo Fighters made an earlier entrance to the concert venue to rickroll the church.

The band members appeared on the back of a truck holding up signs of their own while Rick Astley’s famous hit blared from the speakers. The crowd loved it just as much (if not more) as the band.

It’s not the first time the Foo Fighters and the WBC have butt heads. The church came out to Kansas City to protest the band’s appearance in 2011. In return, the band put on a protest of their own outside the venue and played “Keep It Clean (Hot Buns)” for the WBC and their fans.

During the Foo Fighters concert that night, Dave Grohl addressed the WBC protest that took place earlier that day while referencing their previous encounter.

“We didn’t have the time to put together the big old show we put on last time, so we figured, you know what, why don’t we just fucking rickroll their ass?” Grohl said to the cheering crowd. “Because nothing says love like a little Rick Astley in your life, you know what I’m saying?”