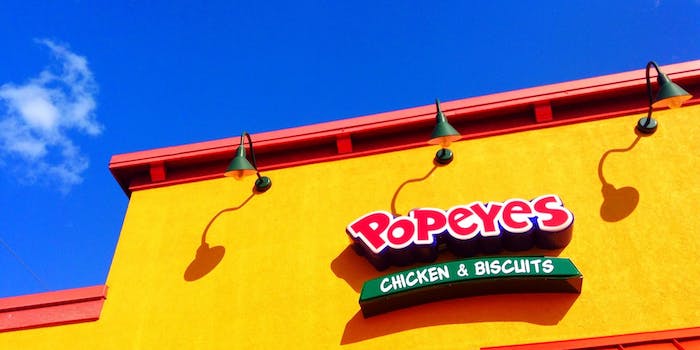 Popeyes worker gets called a ‘slow ass’ by impatient customer

A Popeyes worker’s emotional–and very human–reaction to being ridiculed by a customer has people discussing the working conditions of fast food workers, yet again.

People are lining up outside of Popeyes to try its $3.99 viral chicken sandwich. And while the hype is surely a testament to how good the sandwich is, it should also serve as a reminder of the hard work that goes into having to keep up with the orders.

Instagram user @tvs_biddy shared a video on Monday of a Popeyes worker who was disrespected by an impatient customer.

In the video, which is only a few seconds long, a Popeyes manager can be seen trying to calm the employee.

“Somebody called me Mr. Slow Ass,” the worker says. “I’m not stupid I heard it.”

“We apologize, we apologize,” a customer is heard saying. Meanwhile, the manager says, “It’s OK, take the customer,” as he points towards the counter.

User @tvs_biddy did not respond to the Daily Dot’s request for comment.

The video was then shared on Twitter, where it opened up a discussion into the toll the fast food industry can have on workers.

“People like this are the reason fast food workers go through hell. They’re people, treat them as such. I’m disgusted people act this way over a fucking sandwich,” one Twitter user wrote.

Anybody catch what the manager was saying? I hope he has that young man's back. You can see the hurt & frustration on his face. Makes me sad.

People are so disrespectful to fast food workers. Just evil.

This shit is mean and heart breaking. We got something broken in us to be so evil.

People like this are the reason fast food workers go through hell. They're people

Treat them as such

I'm disgusted people act this way over a fucking sandwich

Every job has dignity, every worker deserves respect.

Aw. The pain in his face. People can be so mean & forget these are real people w/ feelings. Just because you’re in a rush to get your chicken slab doesn’t mean you have the right to be an impatient ass. Respect your fast food worker.

— his feeling are definitely hurt. a sandwich has y’all really acting a donkey out here. I hope he’s having a better day.

As some pointed out, the worker’s reaction should serve as a reminder that people behind fast food counters are still humans. Someone suggested that Popeye’s was likely ill-prepared for the demand, leading impatient customers to take out their frustrations on the workers.

Popeyes was not prepared for the demand. People we're waiting in line 2 hours just for the sandwich and many Popeyes locations sold out. Due to the popularity Popeyes is unable to keep up. Customers are getting frustrated and taking it out on the workers.

Meanwhile, Popeyes workers have said the mounting pressure has been very difficult for them. One employee told Business Insider that they feel like they are “working like a slave in the back.”

“My experience at Popeyes has been fine ’til this sandwich has come,” the employee said.

It’s unclear if Popeyes is doing anything to compensate its workers for the sudden influx in requests for chicken sandwiches and customer harassment they are enduring.

The Daily Dot has reached out to Popeyes.