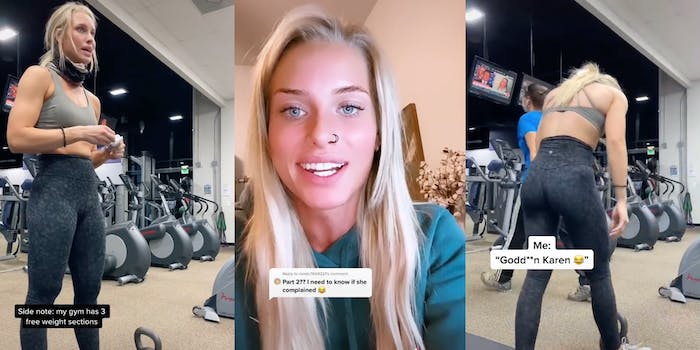 Yet another woman dubbed a “Karen” is making a last-minute appearance in the final viral headlines of 2020. This time, a woman was trying to throw her weight around at a gym.

TikToker and personal trainer Erin Killeen was just trying to get her workout in when she was approached by another patron who felt entitled to her equipment. The camera was already rolling as Killeen was filming her routine for TikTok at the time.

“I was completing a superset with 1 dumbbell & 1 kettlebell… this lady approached me & made a scene because I wouldn’t change weights so she could use mine,” she wrote on the video.

The woman, who remains off-screen during most of their interaction, starts out trying to convince Killeen to stop in the middle of her set and switch to other weights.

Killeen fires back the exact same offer, asking, “Do you see those other dumbbells?”

“Honey,” the woman whines. “Are you serious?”

“There’s an entire gym. Like, use the entire gym,” Killeen tells her. She noted in a subsequent comment that the gym is 21,000 square feet and currently only allows 35 people in at a time, meaning there was more than enough equipment available for Karen to utilize in her workout if she didn’t want to wait.

The woman informs Killeen that she can “go complain right now,” which Killeen encourages her to do.

“Go complain! Go for it! Because I’m using one dumbbell. And he’s going to come and tell you to use another one,” Killeen replies.

The woman finally walks away, and Killeen mutters that the woman is a “goddamn Karen” as she passes by.

Killeen’s TikTok following of more than 336,000 commended her for standing up for herself in such a strange situation.

“So much respect for you standing your ground,” wrote @yuhyos. “You did not stutter once.”

“I would have simply thrown it ‘to’ her,” @baileyplunk2 chimed in.

In a follow-up video, Killeen explains that the woman actually didn’t end up complaining to a manager and went to another free weight section—like Killeen had told her to do from the start.

“Sometimes people are having a bad day, and, whatever,” she said. “There are a lot of [people like that] and you just have to laugh and brush it off, and honestly, I find it kind of entertaining.”