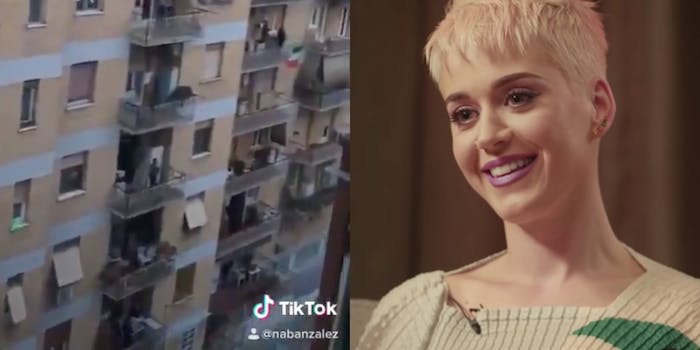 Other celebs fell for it, too.

Twitter stans have tricked celebrities like Katy Perry with videos of Italian residents singing in their neighborhoods during coronavirus quarantines.

Residents and businesses in Italy have been under government-mandated lockdowns to prevent the spread of coronavirus since last week. Videos spreading online show that to keep themselves from going stir crazy, people started singing from their balconies—and entire neighborhoods burst into song.

As the videos made their rounds on Twitter, people overlaid audio clips from concerts and tricked celebrities into thinking that Italians were singing their songs. Katy Perry, Madonna, Cheryl, Shawn Mendes, and Hayley Williams from the band Paramore were all fooled.

Katy Perry retweeted a video dubbed with audio of people singing “Roar” and commented, “You cannot break the human spirit. We are one in this.” Her original tweet included the Hungarian flag emoji, but she has since replaced it with the Italian flag emoji.

Her followers swarmed her post with replies. “GIRL IT’S FAKE,” one user wrote.

The same thing happened to Madonna. The international pop star tweeted a fake video of people singing “I Rise” off of her latest album, Madame X. She captioned the video with, “Let Us All RISE UP. everywhere around the world!!! #Rise”

Hayley Williams almost fell for the trick after posting a video with audio of people singing “Ain’t it Fun.” She commented on the tweet asking, “Is this real?” but her fans warned not to fall for it. Williams then tweeted “lol i knew it yall love to play me” and deleted the video.

But on Monday afternoon, users were still tweeting fake videos of quarantined Italians with songs including “Always Be My Baby” by Mariah Carey, “Lose You to Love Me” by Selena Gomez, and “Chun-Li” by Nicki Minaj.

While people are having fun with the fake videos, the real ones are just as heartwarming.

In Turin, Italy, people sang and danced to the “Macarena.”