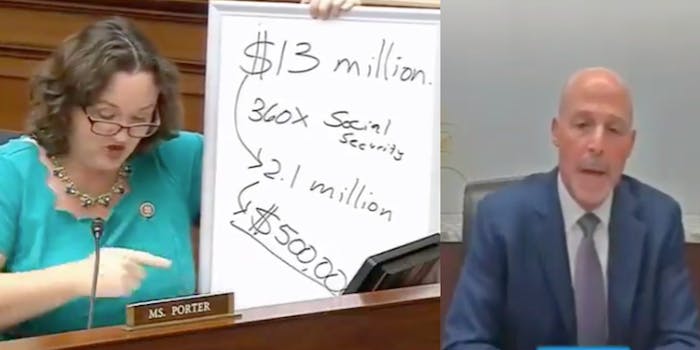 A video featuring Rep. Katie Porter (D-Calif.) demolishing an ex-pharma CEO via her whiteboard has gone viral, and people online are calling it “satisfying” to watch.

On Wednesday, Porter cornered former CEO of Celgene Mark Alles for earning millions through price gouging a cancer drug, Revlimid, as he seemingly fumbled his way through the interrogation.

“Do you know what the price of Revlimid was when it first hit the market in 2005?” she asks Alles. She picks up a whiteboard that has “Revlimid” and “cost of 1 pill” written on it.

She then asks him what the price for it was in 2013, and Alles once again fumbles. Porter reminds him it doubled.

The price in 2020 is now $763, she writes on her whiteboard. “I’m curious, did the drug get substantially more effective in that time? Did cancer patients need fewer pills?” she questions.

He gives an answer that is seemingly unrelated to her question, mentioning how the company found more patients for the drugs. Porter, once again “reclaiming [her] time,” asks: “Did the drugs start to work faster? Were there fewer side effects? How did you change the formula or production of Revlimid to justify this pricing hike?”

She then uses her whiteboard to list the millions he made—”200 times the average American’s income”—while the cost of the drug doubled.

While Porter often holds people in powerful positions accountable, the use of her whiteboard when grilling Alles, in particular, caught the internet’s attention.

“When  @RepKatiePorter  pulls out her whiteboard, it’s a rap for you, ole boy. She’s about to dry erase your dignity, babycakes. Thoughts and prayers,” Elle writer Eric Thomas wrote.

“Dressing up as katie porter and her white board for halloween because you KNOW that would scare the shit out of some people,” writer Taylor Trudon tweeted.

“I’m going dressed as Katie Porter’s white board for Halloween to strike terror in the hearts of rich white executives,” wrote another Twitter user.