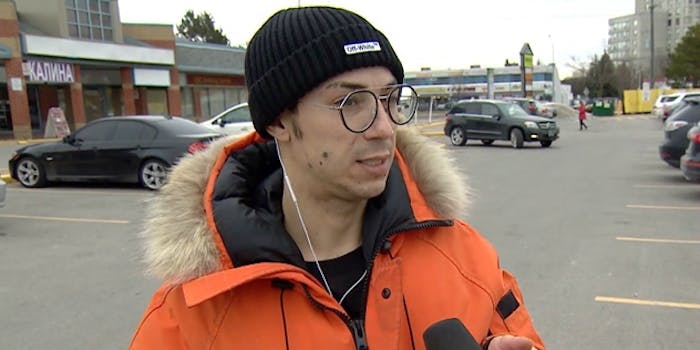 SoundCloud rapper arrested for falsely claiming to have coronavirus on plane

In an attempt to make a viral video, the man prompted an emergency landing.

A 28-year-old Toronto SoundCloud rapper was charged after pranking a plane full of people in an attempt to “go viral” by claiming he had coronavirus.

James Potok, a SoundCloud rapper with more than 30,000 Instagram followers, alleged mid-flight that he had the virus, which has claimed nearly 500 lives. He was aboard a flight of 250 passengers traveling from Toronto to Montego Bay, Jamaica, when he made the claim, prompting an emergency landing.

“Can I get everybody’s attention please. I just came back from Hunan province, the capital of the coronavirus. I’m not feeling too well. Thank you,” Potok declared.

The coronavirus is believed to have originated in Wuhan, China, and cases have been confirmed in more than two dozen countries, including in the U.S., causing worldwide panic. Quarantines have been put in place to avoid an epidemic, and airports have been on high alert by screening for symptoms of the virus.

It comes as no surprise that the announcement was not taken lightly. The Potok’s plane was forced to turn around and make an emergency landing at Toronto Pearson International Airport.

Potok was escorted off the plane in a mask and gloves in standard infection-control manner, as angry fellow passengers booed him to the exit. The flight awaiting the WestJet aircraft in Montego Bay was also canceled as a result.

In an interview with Global News, Potok confessed that the prank did not invoke the kind of attention he was hoping for.

“I was looking to get a viral video,” Potok stated. “I figured it would invoke some kind of reaction, like ‘this kid’s got some balls’ or ‘this kid’s crazy,’ whatever it is.”

Potok was arrested, charged with mischief and “breach of recognizance.” He is scheduled to appear in court on March 9.

It’s not yet clear whether he will face jail time or forced to pay back the airline for his prank.